Darts in London - The Jolly Anglers Pub in Wood Green

Prior to the Crazy Golfers Christmas Meet-up at Rileys in Victoria, Brad Shepherd and I met up at Wood Green before heading off to visit and play the Crazy Golf course at Alexandra Palace.

We followed a Brown Tourist Sign to point us in the right direction and one of the first things we spotted was another very interesting sign, this time outside a Pub! 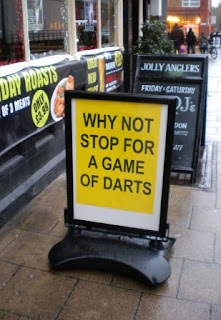 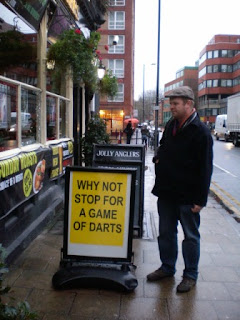 We decided to come back and give the Jolly Anglers pub a go on our way back after playing at Ally Pally. Just a short distance further along Station Road we spotted a Darts Shop too! And it was on a 'Bradley Road'!!! Sadly it had closed down, so we couldn't get stocked up on any Darts supplies ahead of the evening's tournament. 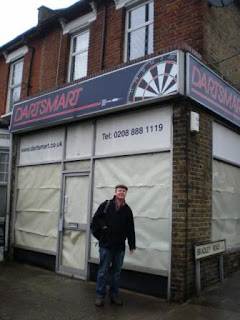 
The Professional Darts Corporation (PDC) World Darts Championships were being held at Alexandra Palace during our visit, so we had a look around, but it all seemed very quiet. 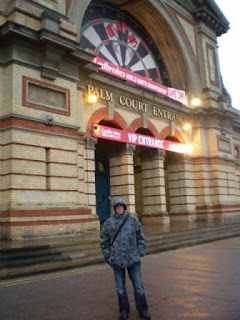 Photo: Me outside the VIP Entrance

After playing the Minigolf course at Alexandra Palace we had plenty of time to head back to the Jolly Anglers to warm-up with a few games of Darts. 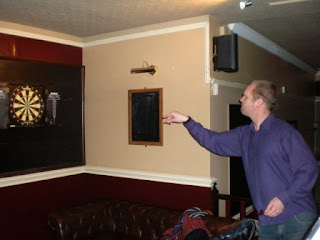 In between drinks and goes on the Quiz machine, Brad and I played five '301' games of Darts, with victories all going my way. However, in the evening's main-event Brad would get his revenge by beating me in our two meetings (group stage & semi-final) and eventually went on to win the 'Rivernear Worlds Professional Crazy Golfers Darts Championship'. 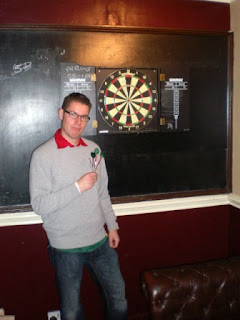 Photo: Me and the Dart Board at The Jolly Anglers pub

The Jolly Anglers pub was friendly enough and the board, while not super high-quality, was in good condition and we were able to play there for well over an hour. Their sign advertising the Darts did well! 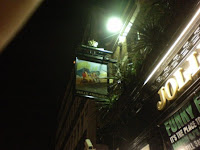 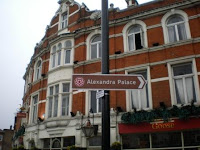 Sprouts & Pong - Previous Blog Posts About Me & Brad's Antics in December's past:
- Guinness World Record Attempt - Most Brussels Sprouts Eaten in a Minute!
- The London-Lu(x)ton Connection play in the 'World Series of Pong' Ping Pong Tournament in Tooting!
Posted by Richard Gottfried at Thursday, December 29, 2011

The Jolly Anglers Pub has now been added to the 'Outside the centre' list on Justin's Irwin's excellent Bachelor of Darts website.

Check out the list at Capital Arrows for details of all the Dartboards in London!

We bought the entire stock of this shop when it closed down and all of the products are still for sale at Lets Play Darts of Enfield
www.letsplaydarts.co.uk
Tel: 020 8342 1111

Come and give us a try. We have thousands of products and even an on-line shop.