On Monday 12th December 2011 Emily and I were invited to the launch night of a new Miniature Golf business based in Manchester.

Birdies Pop Up Golf has launched a new Portable Minigolf Business providing a modular portable Pop Up Golf course that is available for events. 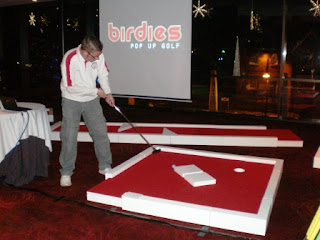 The launch event saw Birdies Pop Up Golf's Mark Rooney and his team set up a challenging 9-hole Miniature Golf course at The Merchant Room, Albert's Shed in the Castlefields area of Manchester. Guests were invited to try out the course and compete in a fun minigolf competition. 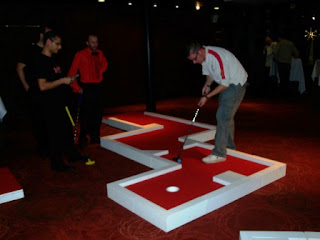 Birdies Pop Up are offering the Mini/Crazy Golf course for Corporate Events, Charity Fundraisers, Marketing Campaigns, Schools, Sports Clubs, Weddings and more. You can find out more at their website. 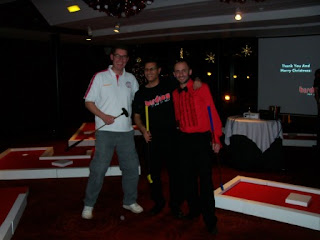 Photo: From l-r Richard Gottfried, Jon Angel and Richard Linden line up ahead of their Minigolf challenge match

The launch event also featured a friendly minigolf competition (with a fine trophy from The Trophy Store). In the Birdies Pop Up Golf Official Launch Night Competition I finished 2nd in the field of over 30 guests at the event. The winner had a score of 38(+2), while I shot a 39(+3). Emily scored a 43(+7) in the two round, 18-hole contest. 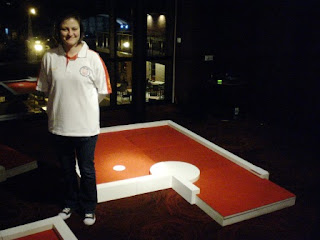 Photo: Emily poses for the camera!

As well as the main contest we also had some friendly rounds and mini-minigolf competitions against fellow Minigolfers Jon Angel and Richard Linden of UrbanCrazy.

In the first contest Jon and I tied on scores of 20(+2) over 9-holes, with Emily hitting a 22. Our play-off saw Jon take the victory with  a hole-in-one at the third extra hole. 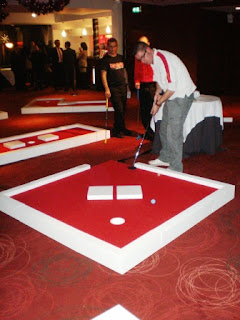 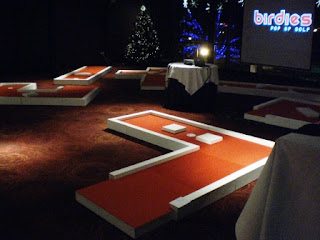 Photo: An overview of the 9-hole Birdies Pop Up Golf course layout 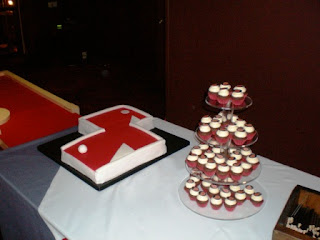 Photo: Special Birdies Pop Up Cupcakes for the launch night were made by Hey Little Cupcake

Photos of the launch event can also be found in the Birdies Pop Up photo gallery.

Happy First Birthday to Birdies Pop Up Golf in Manchester. All the very best for 2013 and beyond!