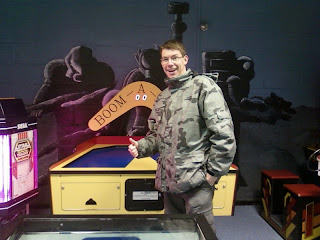 In addition to the main LaserForce Laser Tag, the Laser Games Arena in Peterborough had a fine selection of Arcade Machines - including a fantastic and quite rare Boom-A-Rang 'Crazy Air Squash' Air Hockey Table! 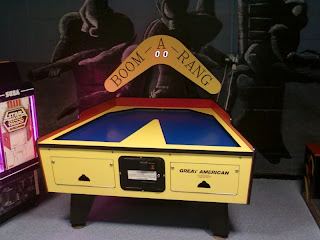 Back in August 2010 we contested The Undisputed International Worlds Crazy Air Squash Championships on a similar Air Hockey Table in Hastings - that World Title Competition was also covered by the excellent Montegue Blister's Strange Games Blog.

On this visit to the City, we felt it only right to contest the 'Peterborough Boom-A-Rang Air Squash Championships'! 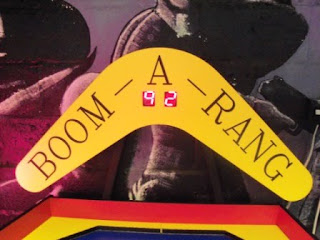 The Grand Final saw Richard face-off against Rebecca 'The Fen Tigress' Evison. The match started slowly, with both players trading Goals, but it soon became clear that the home-town favourite had the fans on her side, and eventually ran out a 9-5 winner, and become the new Peterborough Boom-A-Rang Air Squash Champion!

Photos from the Grand Final. 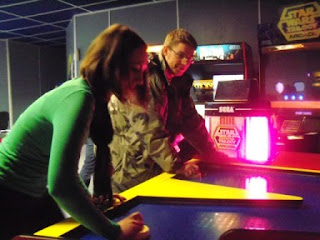 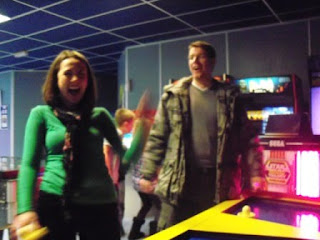 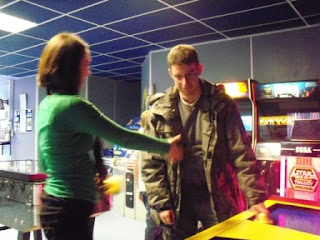 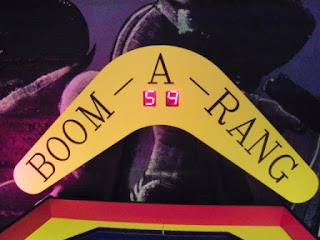 Link to a multitude of other Ham & Egger Files Blog Posts about Air Hockey and the like!
Posted by Richard Gottfried at Sunday, February 20, 2011

Bad luck in the final Squire. Looks like you might be one to watch at the next world championships in Hastings though. Although Zimmermann will no doubt be a threat.

Hastings will always be the spiritual home of The Undisputed International Worlds Crazy Air Squash Championships, but with the town now lacking a Crazy Air Squash/Boom-A-Rang table I don't see how the event can take place there.

Perhaps the Hastings Machines have been moved to Margate's Buttons!