Ahead of the Green Doubles Minigolf Tournament in Hither Green on Sunday, I played in a pair of warm-up Doubles matches at the 18-hole course last night. This time I teamed with Alan 'Stormin' Norman in two losing efforts to Chris and Michael Smith.

In the first match Alan and I lost 5&3 (18-holes matchplay format), while in the second '3-hole Matchplay Challenge' match we lost by one-hole. 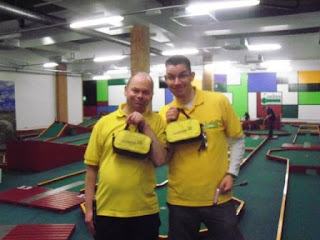 Minigolf Fact - Alan and I both made our BMGA Tour Debut's at the same tournament - the 2007 BMGA British Masters in Southend-on-Sea.

The partnership with Alan means that Oliver 'The Machine' Florence will be my 12th Minigolf Doubles Playing Partner (an earlier miscount on my Doubles Record had lead me to believe that Ollie would be my 'Lucky' 13th Doubles Partner. This is not the case).

Gottfried & Florence to compete in The Green Doubles Minigolf Tournament 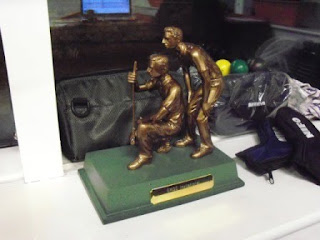