Gottfried & Florence to compete in The Green Doubles Minigolf Tournament

A new minigolf team will be created this weekend, as Luton's 'Squire' Richard Gottfried and Walton-on-Thames' Oliver 'The Machine' Florence will be teaming-up for the first time at The Green Doubles Minigolf Tournament, in Hither Green on Sunday. 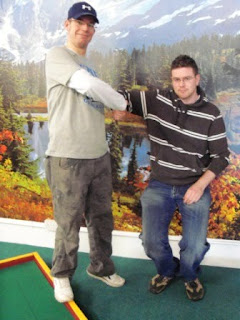 The BMGA Tour Professionals are both Great Britain International Minigolfers, and keen minigolf bloggers. However, the GMGC Green Doubles Tournament will be the first-time the pair have teamed together. To date, Richard has teamed with ten other playing partners.

Richard's last minigolf doubles match was on the 1st August 2010, as he and Emily 'Coach' Gottfried faced the Bangor Minigolf Club in a losing effort in the 126-hole Northern Ireland Belfast Bangor Antrim & Larne Invitational Tournament. The Luton Wanderers Minigolf Club were due to meet the Portsmouth & Southsea Crazy Golf (Gold) Club on the 29th December 2010, however the Adventure Golf course was closed, so the result of the Southsea Pirate Masters was decided by a coin-toss.

OMG! You played minigolf with 'The Doctor' Matt Smith

Not that 'Matt Smith'.

This Matt Smith was a Minigolf Champion (of sorts) in Portugal - or so he told me!