Heading across to Wales to compete in the 2011 Cystadleuaeth Minigolff Cymraeg (Welsh Minigolf Tournament), Emily and I were planning on visiting and playing the Minigolf course at the Stonehenge Golf Centre in Larkhill, Wiltshire on Friday 15th July 2011. 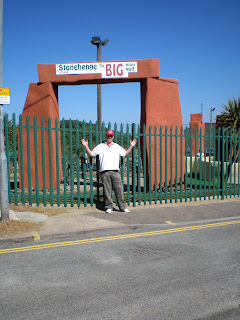 Interestingly the course at the Stonehenge Golf Centre is a Beton-style Miniature Golf course, more commonly found in mainland Europe, so I was intrigued to see what condition the course was in, as they are very good types of course to practice on, as they are very very tough (as we have found when on International Minigolf Duty).

Prior to reaching the Stonehenge Golf Centre in Larkhill I remembered that a new Adventure Golf course had recently opened in Maidenhead at the Maidenhead Golf Centre. So we headed there to have a game. That course became the 253rd course played on our Crazy World of Minigolf Tour. 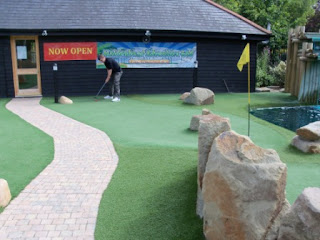 We then headed back on the road, and our next location of Bracknell, where we had spotted on the MiniatureGolfer.com List of Courses that there was a Crazy Golf course at Jocks Lane Recreation Ground.

There was indeed a course there, which turned out to be an 18-hole course consisting of 9-holes of Swedish Felt B-Run and a 9-hole Farm-themed Minigolf layout. This was the 254th course played on our Crazy World of Minigolf Tour. 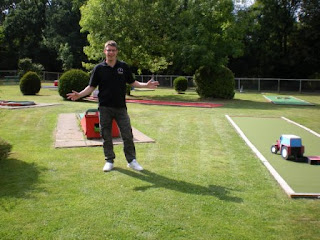 So, with two new course visits under our belts we set off again to visit the Stonehenge Golf Centre.

However, just ten or so minutes away, and with time running out to reach Larkhill before they closed for the day, we took a wrong turn and ended up on the road to Andover!

With no junctions to make a u-turn we decided to head to Andover as, once again, the MiniatureGolfer.com Course List had come up trumps and showed a Crazy Golf course at the Charlton Lakeside Pavilion. Luckily for us it was still there and was open until 8pm! So, we had a game there.

Interestingly, the course's second hole housed a Dolmen - which is what Stonehenge is a collection of! 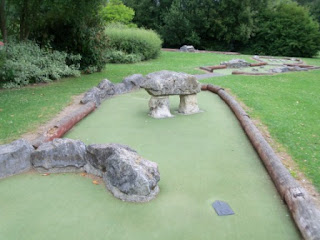 I remember I had once had a discussion with Anthony Pope, from the excellent Splash Point Mini Golf course in Worthing (course played #181), about Dolmen as he was considering adding one to the course.

I also found an interesting way to Ace the 18th hole on the Andover Crazy Golf course.

With the time past 7pm we were too late to play at the Stonehenge Golf Centre in Larkhill, but still decided to head along to have a look to see if we could snatch a look at the course from beyond the fence. 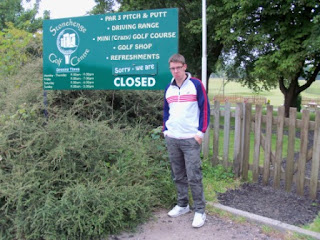 But we did spot a Putting course at the centre. 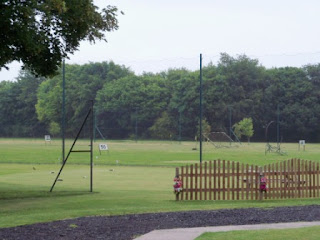 We then headed back on the road to Wales, and decided to drive past the real Stonehenge on the way. The car park was closed so there was nowhere to park up, but Emily did manage to grab the photo below. 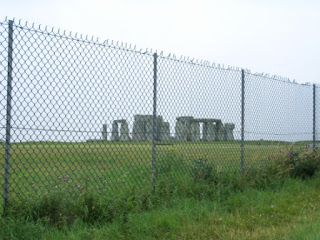 I had visited Stonehenge with my family when I was a child, but Emily had never been, so it was a nice bonus to have a quick visit of sorts. We were both amazed at how close the road actually is to it, and unlike its neighbour, Woodhenge, was actually very visible to passing drivers.

As another bonus before we reached Wales, we also got to have a very nice two-course meal at The Barge Inn at Seend Cleeve, Wiltshire, which offers a great Gluten Free Menu for Coeliacs.

Our eight hour journey to Wales turned up some interesting 'finds' and was a nice start to a long weekend of fun in Cwmbran, Newport, Clevedon and Weston-Super-Mare.

Writing this blog post also reminded me of a Minigolf and Stonehenge-related story I had seen before with claims that Stonehenge was ‘part of crazy golf course for race of giant humans’.

More from the Crazy World of Minigolf Tour.
Posted by Richard Gottfried at Tuesday, July 19, 2011

The Putting Penguin team have just uploaded a review of the 130th Miniature Golf course they have played (in their 32nd state) and the 214th course reviewed overall on their website. Interestingly (and the reason for posting it as a comment on this blog post) the course has a Stonehenge-themed hole as part of the overall 'Around the World' theming.

Click to read the review of Pizza Putt in South Burlington, Vermont