They have both been selected to represent Great Britain at the highest level of International Minigolf Sport and will be competing at the 2011 WMF Nations Cup tournament in Stockholm, Sweden in June. Richard, 30, and Emily 29, play regularly on the British Minigolf Association Tour, which sees minigolf, crazy golf and adventure golf competitions played at Miniature Golf courses around the UK. 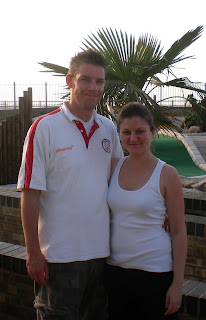 This will be the pairs second appearance for the Great Britain Minigolf Sport Team, having both previously played in the 2008 WMF Nations Cup competition in Tampere, Finland. The 2011 WMF Nations Cup event will be played on the two 18-hole minigolf courses at the Tantogårdens BGK Miniature Golf Club in Stockholm, Sweden.

Richard said “It’s great to have been picked for the Great Britain Squad for 2011 and brilliant news to be in the team for the Nations Cup tournament in Sweden. I can’t wait to get into international action again.”

Emily said “I am thrilled to be playing for Great Britain again. It is a real honour and I am confident that I have learnt a lot since 2008. I am hoping for a better finish and will be putting in my full effort to do as well as possible.”

Great Britain’s Team Manager Marc Chapman added “National Team players have been selected on ability and performances on the British circuit over the past two seasons of competitive play. The standard of our elite players has improved dramatically over the last season, therefore, I can say with confidence that this is the strongest British squad ever assembled in this, a World Championship year.”

Sean Homer, BMGA chairman, said “The experience of playing internationally will not only benefit Richard and Emily in further developing their minigolf skills and techniques but also helps to raise the profile of our players and the Association both home and abroad, all of which is very positive and encouraging for us as an organisation. I am sure that Richard and Emily will thoroughly enjoy the experience of representing their country and in the process develop some great links with the foreign players taking part. On behalf of the BMGA and all of our members I would like to wish Richard and Emily the very best of luck at the Nations Cup competition in Sweden and look forward to following their progress this season.”

The Great Britain kit for the competition will be supplied by UrbanCrazy. Based in London, UrbanCrazy is an innovative and exciting company, designing and building permanent and portable crazy golf, mini golf and adventure golf courses. Their permanent courses are ideal for parks, leisure centres and back gardens - and their portable courses are available to rent for corporate events and parties. They also supply a wide range of high grade miniature golf equipment and accessories. UrbanCrazy have sponsored the Great Britain team in a number of International tournaments since 2007.

In 2011 the British Minigolf Association (BMGA) will be sending teams to the WMF World Adventure Golf Masters in Hastings, England; and the WMF Nations Cup and WMF World Minigolf Championships in Stockholm, Sweden.

Support from local businesses would be very welcome to the players and Great Britain Team taking part in the international minigolf events in 2011. Interested parties are encouraged to make contact with the BMGA before the International season gets underway in Hastings at the World Adventure Golf Masters in May.

To date 31 BMGA Tour Players have made a total of 62 appearances representing Great Britain in World and European Championships (both Youth and Adult), Nations Cup competitions, the Asia Open and the Czech Open since 1999. Peter Parr was the first GB International and made his debut in a WMF Minigolf Tournament at the 1999 World Minigolf Championships, in Papendal, The Netherlands.

The BMGA Tour consists of Minigolf ranking events that take place at Minigolf, Crazy Golf and Adventure Golf courses across the UK. Last year there were 22 BMGA Tour competitions and a total of 15 players lifted BMGA Tour titles.

For further details about the BMGA and UK Minigolf and Crazy Golf please email mail@minigolf.org.uk, or visit http://www.minigolf.org.uk/.