Richard finished in 16th place in the 19 player field, with Emily in last place, with both players struggling on the 36-hole, two course ‘Swamp’ & ‘Volcano’ layout. 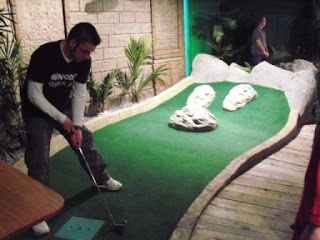 The tournament was played over three 18-hole rounds at the Jungle Rumble venue, and was won by Oxford’s Michael Smith with a score of 92(-16). Cambridge’s Adam Kelly was runner-up, with Lewisham’s Nick Sandqvist third.

Following the main-event Richard competed in the five-player Scrap Iron Cup competition played between members of the Midlands Minigolf Club. In the 18-hole event Richard qualified for the matchplay final against Flintshire’s Peter Jones. The final result saw Richard seal a one-hole victory to win the cup for a fourth time.

Richard said “To be honest the tournament was a disappointment and with a niggling back injury I didn’t feel that comfortable in practice either. The two Jungle Rumble courses were fun to play and very testing, but I just couldn’t find the holes-in-one out there in the tournament itself, I had a lot of close twos, but then picked up some ugly threes. But it was some consolation to regain the Scrap Iron Cup, and great to have a new city stop on the BMGA Tour.”