14 years of our Crazy World of Minigolf Tour 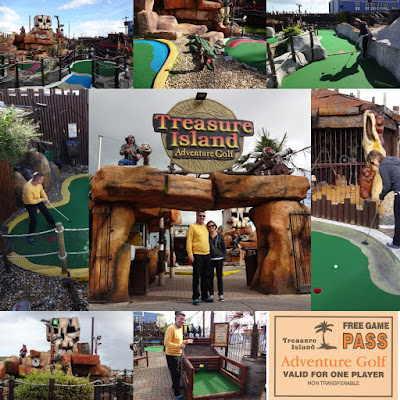 We played the Victory Trail course at Treasure Island Adventure Golf in Southsea, Hampshire on this day in 2006. At the end of our round on Saturday 30th September I won a free game by firing the cannon on the lucky last hole.

Our minigolfing adventures have been rolling ever since!

From the archives - Check out the blog post looking at our first game at Treasure Island Adventure Golf in Southsea. 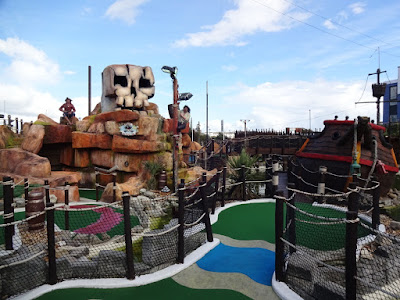 Joining us on that first course visit was my brother Christopher. He's also played a fair few courses on his own branch of the Crazy World of Minigolf Tour. The latest being the Alton Water Mini Golf course in Ipswich, Suffolk. That brought the combined total course visits to 982!

We've now visited 956 courses, 39 of which have been overseas.

From the archives - Check out the results of our first-ever game of Adventure Golf against each other in 2003.

The growth of minigolf

When our travels began in 2006 there were around 600 courses in the UK.

Minigolf has grown in popularity and has moved from only being a traditional outdoor seaside summer activity to become a year-round game that can be played indoors, outdoors and at pretty much any time of the day.

A number of new courses have come and gone during the last decade and we have been to a number of pop-up courses too. There are still new courses being planned, developed, built and opened.

When we first set out to visit all the courses in the country there were only two indoor courses, one in Felixstowe and one in Great Yarmouth. Both are still open and have been joined by around 100 other indoor minigolf venues!

We visited our 900th course overall when we played the North Bay Mini Golf course in Scarborough, North Yorkshire in June 2019.

We visited our 900th course in the UK when we played the indoor Pirates Cove Adventure Golf course at the New York Thunderbowl in Kettering, Northamptonshire last December.

Before the coronavirus pandemic we were closing in on visiting the final 40 courses of the original 600 we set out to play in 2006. We're also very close to hitting 1,000 course visits overall.

We've been to a total of 46 courses this year. Fifteen of those are new courses added to our Crazy World of Minigolf Tour total and eight of them have been visited in the time of coronavirus.

It'll be interesting to see whether we'll be able to get down to Southsea to celebrate the 15th anniversary of our minigolfing tour next year.

Emily swung by Treasure Island Adventure Golf in Southsea on the way back from her trip to the Isle of Wight last month.

We played the Victory Trail course at Treasure Island Adventure Golf on Saturday 30th September 2006. I won a free game by firing the cannon on the lucky last hole and our minigolfing adventures have been rolling ever since!