As we're BIG fans of minigolf and the summer we've created a Summer Mini Golf Checklist containing 18 fun minigolf 'things to do' to get as many people playing the great game as possible. 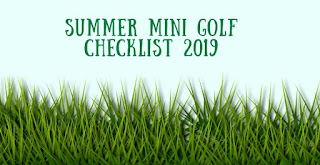 1. Play at five different minigolf courses
2. Score par or better on a course
3. Compete in a miniature golf tournament
4. Score seven holes-in-one
5. Play a game of Pitch & Putt miniature golf
6. Play at a Pirate Adventure Golf course
7. Play a course with a Jungle-theme
8. Play a dinosaur-themed course
9. Play three windmill obstacles
10. Play at a space-themed course
11. Read a book about minigolf
12. Play a portable or pop-up course
13. Play at an indoor course (it doesn't have to be on a rainy day)
14. Play a course on a pier
15. Find and post a minigolf postcard
16. Post about minigolf on social media and use the hashtags #minigolf and #summerminigolf19
17. Play three loop-di-loop obstacles
18. Play minigolf at a garden centre
19th hole – Win a FREE GAME on a Lucky Last Hole!

We hope you enjoy ticking off the activities on the Summer Mini Golf Checklist wherever you are in the world.

The first three people to complete the Summer Mini Golf Checklist 2019 will win a free game with us, either at their local course (if we're in the area), or at one of our local courses (if they're in the area).
Posted by Richard Gottfried at Sunday, August 04, 2019