Paradise Island Adventure Golf at the Trafford Centre in Manchester

Last Saturday we visited Paradise Island Adventure Golf at the Trafford Centre in Manchester for a couple of games against our friend and minigolf rival Seth 'Clockwork Orange' Thomas. 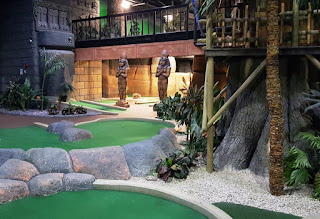 Having recently won the PIAG Open championship Emily was the one to beat and in the first round, played on the Tiki Hut Trail, Emily took the win with a score of 37. Seth was second with a 39, while I hit a 40.

Round two took place on the Temple Ruins layout. I scored a round of 35, including seven holes-in-one! Emily was second with a 38, while Seth was one-shot back to finish third.


Emily and I tied for the win on 75 shots each, with Seth on a combined score of 78.