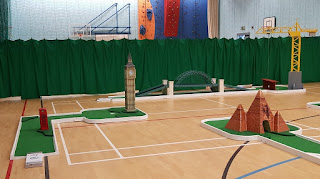 On the way up to Newcastle upon Tyne last Friday we called in to Wolsingham Sports Hall to play the pop-up Landmark Golf course. 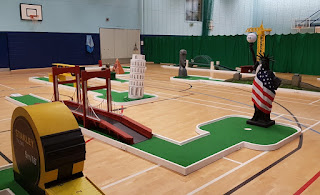 The course had been set up for the week and was proving popular. Some groups were finishing their rounds as we arrived and so we had a clear run at the layout.

We received a nice welcome at the leisure centre and from the chap at Landmark Golf. After Ian from the course had explained the rules and tee-off points we set off on our trip around the world in 9-holes.

It's brilliant when a course has a wow factor and the Landmark Golf course certainly did with the Statue of Liberty. In fact each of the holes had something interesting about them.

We've played a number of fibreglass courses on our Crazy World of Minigolf Tour and this was certainly one of, if not, the best so far. We really liked the corner pieces that allowed for rebound skill shots to be played.


We've been following Landmark Golf on social media for a while and it was nice we were able to time the trip to Newcastle with one of the Landmark Golf events.


The Landmark Golf course was the 919th visited and 525th played on our Crazy World of Minigolf Tour.

It was really nice to see a portable minigolf course set-up indoors at a sports hall. As we were leaving another couple of groups came in to play. It'd be brilliant if more leisure centres and sports halls had pop-up events like the one in Wolsingham.


Following its busy stint at Wolsingham Sports Hall the course moved up to Newcastle for a run at a hotel.


Speaking with Ian from Landmark Golf he told us that they create a number of different configurations with the course and obstacles and so the layout can be different each time. They've also got one of the 'letters' Crazy Golf courses which spells CRAZY GOLF when set-up. Hopefully we'll get to have another game of Landmark Golf in the future.