Five years on the Crazy World of Minigolf Tour!

We've since gone on to visit a total of 419 courses in eleven countries to date, playing 268 of them. These 419 courses have gone under various names and guises (not all Miniature Golf courses are the same), in fact we've played the game at courses using a total of 43 synonyms!

The tour itself and the many road trips we've been on since 2006 came about after Emily and I set about visiting as many seasides in the UK as we could. So far we've made it to 149 coastal resorts, towns and villages by the sea. We've played Minigolf in 89 of these places. 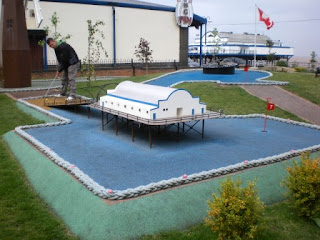 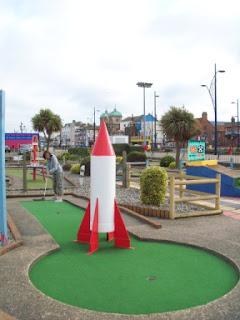 So to celebrate the half-decade landmark point of the Crazy World of Minigolf Tour we've put together the following facts and stats.

Number of courses visited but not played = 151

Number of Piers that have got a Minigolf course on, but which wasn’t open on our visit = One – Southsea

Number of Piers that advertise that they have got a Minigolf course on, but haven’t = One – Brighton

I think you're pushing it on the Islands :))

May you both have many more years producing extraordinary statistics!!

Our Minigolf Rival and Crazy Golf Enthusiast Seth 'Clockwork Orange' Thomas has blogged about our Minigolfing Milestone over on his blog Forever Pushing Buttons.

You can read his article at - Mini but Crazy