July 29th 2011 saw the beginning of a new minigolf competition series, with players from JML competing against each other for inter-office glory.

Emily “Coach” Gottfried is well-known within the walls of JML’s London HQ for her exploits and achievements in both the Irregular Minigolf Tour with “Squire” Richard Gottfried, and the BMGA Tour where she has competed in a number of Professional Miniature Golf events all over the UK. And a few brave, daring souls have often laid down the gauntlet and challenged Emily to a game of minigolf or two... 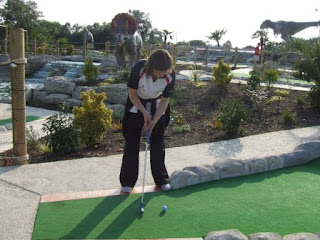 So on July 29th, the talking was over and Luton’s Emily Gottfried headed to the new Dinosaur Safari Adventure Golf at the A1 Golf Driving Range in Arkley with Stevenage’s Simon Hinton to put the grand-standing to an end.

Whilst being a “big golf” player, Simon regularly talked up his short-game, however on arrival at the course, nerves seemed to take hold, and even a quick cigarette couldn’t dampen the nerves as both players approached the first hole.

This first match-up took place post-work on a beautiful July summers evening, and it proved to be the perfect setting for Emily to prove her minigolfing ability, when she bested Simon 42 to 45 on stroke play, and 2-up on matchplay. 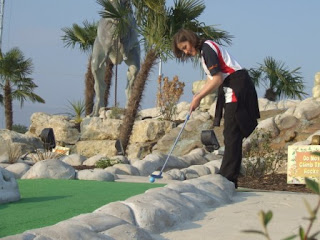 Simon said after his defeat “It was a true pleasure to be able to demonstrate to Emily the finer details of my grip, the precision involved in the setting of the hips in my stance, and the pendulum effect of my in-out-in putting path.”

Hinton added “I know that Emily was extremely pleased as she now knows how not to putt like a complete t**t, and this will hold her in excellent stead in future competitions and the inevitable world rankings. And frankly, it’s all thanks to me.”

Emily said “I enjoyed the game immensely, and as I always knew I would win, it wasn’t much of a surprise, but it was very welcome all the same. Simon does have a certain finesse with a putter, and could definitely be a contender, if he honed his skills in certain areas. He suffered a five out there today, but he can work on that and take me on again in the future. However, having seen Simon’s recent comments, I can see that it will take another few defeats at my hand before he can accept defeat gracefully”. 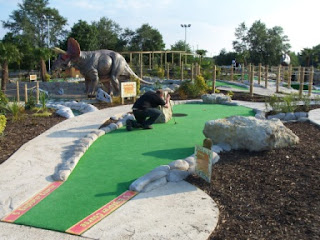 Following on from these self-aggrandising comments Emily “Coach” Gottfried agreed to a re-match, which took place on August 9th.

In this second match Emily again beat Simon, 40 to 41. The victory was by a smaller margin, but improvements were made by both players, including aces by Emily on the 1st and by Simon on the 14th. The match ended all-square on matchplay. At this point, Simon grudgingly acknowledged that some of Emily’s guidance had helped his game and a second-round was played. 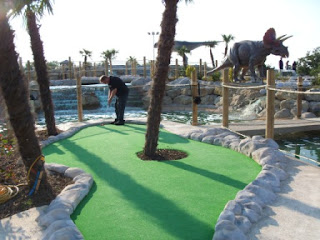 This round showed much improvement again, and with Simon following Emily’s coaching tips he managed to win 38 to Emily’s 41. This included another ace on the 14th for Simon - making it his favourite hole. Simon also won matchplay 2-up. 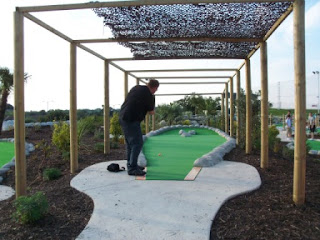 After the two-rounds were over Simon said “An under par round (course par is 40) equalling the course record came as absolutely no surprise to me. This is testament to my determination, focus, skill and on-course imagination. Oh – and Coach helped a bit too”.

Coach said: “I won the first round and lost the second, but I feel that I can take some credit in Simon’s victory. I saw his potential and some handy advice helped him to his win”.

The JML Irregular tour will hopefully continue later in the year with at least three more colleagues lined up to compete.