I recently discovered the website and blog of The Brown Sign Way via some facebooking related to Minigolf.

The Brown Sign Way and Follow The Brown Signs are written by Amanda Hone and are well worth a look if you’re interested in travelling, signs (obviously), the UK & new and interesting things to do.

Before checking out the The Brown Sign Way blog I wasn’t aware there were a grand total of 93 different types of Brown Sign Symbols, ranging from 10 Pin Bowling, to Museums, to Windmills, to Zoos, with Golf also included, but not specifically Crazy or Mini Golf in the ‘93’.

Looking through our photo archives from the Crazy World of Minigolf Tour (and beyond) I found a few examples of Brown Signs I’ve snapped en route to, or at, places we’ve travelled to.

I found that the excellent Strokes Adventure Golf Course in Margate, Kent (course played #34) has the most photographed Brown Signs in my collection. 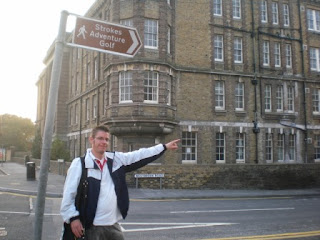 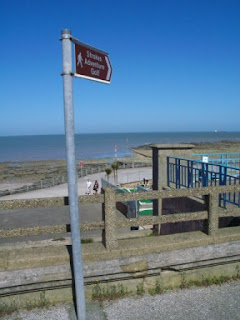 There are probably many more Brown Signs we’ve passed by on the way to some destination, or been side-tracked by on one of our many road trips around the UK. 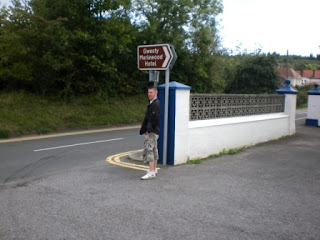 Photo: The Brown Sign at the Merlewood Hotel (Gwesty) in Saundersfoot, Wales (the location of an unplayed Miniature Golf course on our Crazy World of Minigolf Tour)

Check out the who, what, how, when, where’s section on the The Brown Sign Way blog to find out more about these useful tools for pointing tourists in the direction of attractions. 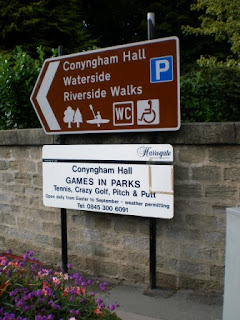 Photo: The Brown Sign (and a White one too) at Conyngham Hall Park, Knaresborough

On our road trip around the Welsh coast in August 2009 we spotted this Brown Sign (below) in Penarth that shows just one of the many different ways that Miniature Golf (and variations such as Pitch & Putt, Minigolf and Crazy Golf) can be spelled in the Welsh language. 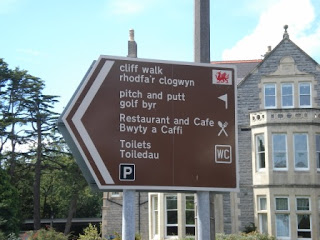 The Crazy Golf at the Rhylstone Gardens in Shanklin Old Town on the Isle of Wight (#65) is the most well signposted Miniature Golf course I've found to date, boasting seven signs on the walk to the course!

As well as Brown Signs in our photo archive, my search also turned up a number of other signposts (and the like), which I’ve snapped away at as they say something to do with Miniature Golf. 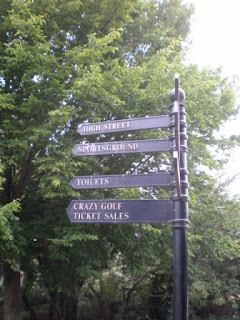 Photo: A Black Sign showing the way to the Crazy Golf course in Tonbridge, Kent 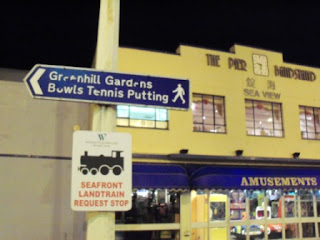 Photo: A Blue Sign showing the way to the Putting course at Greenhill Gardens in Weymouth, Dorset 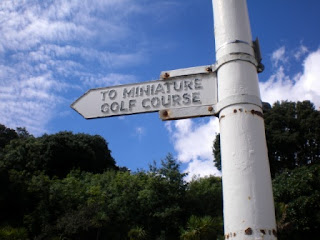 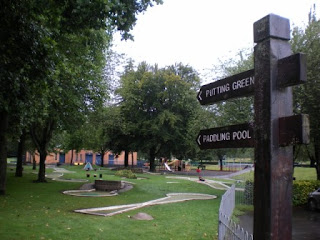 Photo: A 'non-standard' Brown wooden sign at the entrance to the Crazy Golf course in Tredegar Park, Newport, Wales (oddly stating it's a Putting Green!?)

Link to the Crazy World of Minigolf Tour

I'm also a fan of the Missin Letters Blog which looks for signs that are missing letters in them.

I've also had a number of photographs that I've taken over the years published for one odd reason or another in a number of media and newspapers (such as the 'broke' Ladbrokes in Stevenage Old Town).
Posted by Richard Gottfried at Thursday, September 01, 2011