Between the 8th and 10th of September 2011 Luton Minigolfers Richard 'The Low-Roller' Gottfried and Emily 'Snake Eyes' Gottfried once again competed in the Las Vegas Minigolf Desert Classic tournament following the thrilling event in 2010 which saw Emily defeat Richard in the 72-hole contest by 178(+34) to 182(+38). 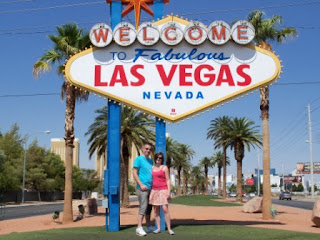 This time the two players were to compete in a three round 45-hole contest, beginning at the brand new 9-hole indoor (in a Bar!) Mini Golf course at The Swingers Club at the Plaza Hotel & Casino, followed by a revisit to the 18-hole Pike's Pass Miniature Golf course at the Adventuredome at Circus Circus, and with a final round at The Putt Park Mini-Golf course. 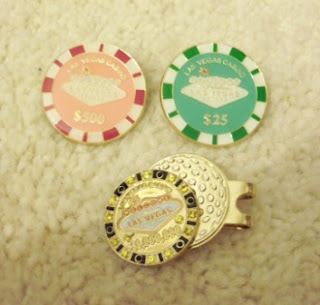 The prizes for the 2011 Las Vegas Minigolf Desert Classic competition


Despite finishing as the runner-up in the tournament, Emily did receive a unique prize as the Silver Medallist as she received a Bicycle Balloon Hat from The Balloon Guy who was at The Putt Park as part of the two-year anniversary special event at the course. 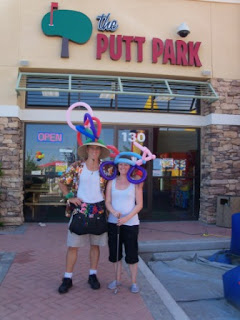 Photos from the final round at The Putt Park 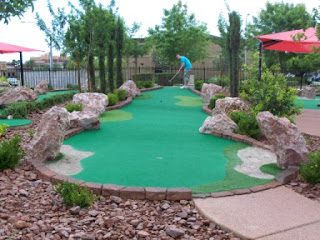 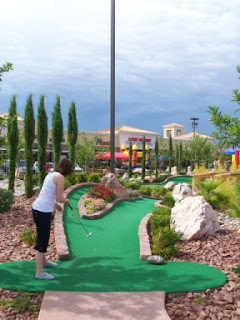 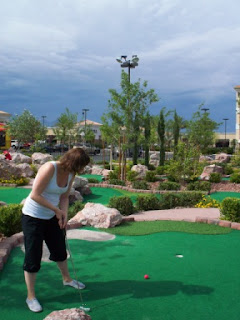 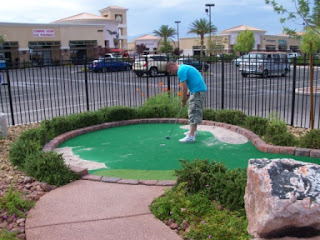 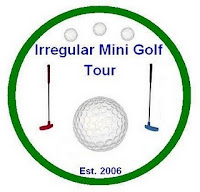 Richard made it two wins on the day as he also won that afternoon's Putt Park Annual Mini-Golf Tournament
Posted by Richard Gottfried at Friday, September 23, 2011

I'm obviously very sad at losing my Vegas title, but I just didn't have what it took this time.

The balloon bicycle trophy was mcuh better than any prize Rich won in Vegas, so I won in that at least!