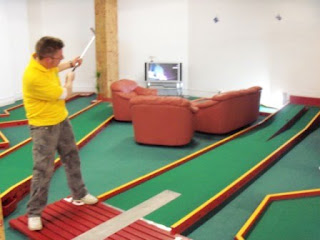 In the two-round six player event Gottfried recorded scores of 35(-1) and 34(-2) for a total of 69(-3), 53 with his +8 GMGC Handicap. This was enough to secure second place in both the handicapped and unhandicapped result lists. William Donelly won the handicap event, with Nick Sandqvist winning the unhandicapped rounds.

The first round of the tournament was played using the course's 'Hard' settings, while the second round used the 'Easy' obstacles.

Following the event Richard said "I am pleased to have hit two good rounds, and to have recorded a new Swedish Felt personal best with my first competitive round on the course following some hole modifications is great."

About the GMGC Club Tournaments

The GMGC are based at the Green Indoor Mini Golf course in Hither Green, Lewisham, London. The course is well worth a visit, and the Course/Club now have a presence on Facebook.

You can check out the Club and Course website at http://www.thegreenminigolf.co.uk/

Great performance Squire... you're improving after the poor start to 2011. Especially with all the pressure you're under, what with a price on your head....

Wanted! Just call me Guy Incognito from now on ;-)