Following the action at the BMGA Star City Open minigolf tournament, and prior to the mayhem of the Laser Station Challenge on Sunday 23rd January a bunch of players waited in the Beach Road Cafe Bar playing pool and whiling away the 25 minute wait.

With some time still to spare the Guild of Rock Paper Scissors (GoRPS) arranged an impromptu RPS Battle!

With seven players competing it was Irchester's Marc 'The Roller' Bazeley who triumphed, with an impressive undefeated streak of 4 wins in a row, in the 'best-of-3-throws-winner-stays-on' format event! 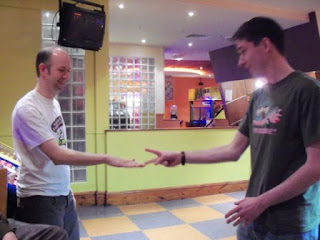 Photo: Kevin 'Max' Moseley throws an agressive 'Paper', only to be cut short by Northamptonshire's RPS #1 Marc 'The Roller' Bazeley.

Back in November 2010 Richard and Emily competed in the UK Rock Paper Scissors Championships (Ollie and fellow GoRPS member Paul 'The Terminator' Jones were spectators then). The GoRPS was formed that very night too!
Posted by Richard Gottfried at Tuesday, January 25, 2011