Duck Curry Supper - A Minigolf Recipe for Disaster or Success?

BMGA Tour Rookie (and Minigolf Blogger) Oliver 'The Machine' Florence has been talking about his pre-tournament diet and restaurant visiting regimen since his BMGA Tour Debut back at the BMGA National Open in January 2010.

Eager to improve, Ollie has been asking for hints and tips on both his game, and his diet, ahead of tournaments, and is partial to a Mild Curry before a big competition!

Back in April Florence asked his blog-readers to vote on a suitable pre-match meal, the results of which pointed to having a 'Chicken curry supper' ahead of the BMGA Scottish Open in May (where The Machine finished 20th).

While in Worthing for the BMGA British Matchplay Championships Ollie was unable to join us for a Curry at Le Spice (which offers Gluten Free options!) instead heading off to a Stag Do in Brighton (that wasn't reached due to 'unforeseen circumstances'!?).

I opted for an unusual approach and plumped for a Duck Curry - rather than Ham & Eggs, or a juicy rib-eye steak (my usual pre-competition choices) - which may, or may not, have played a part in my runner-up spot in the BMGA British Matchplay Championships itself!

As somewhat of an expert on the dining habits of the minigolfer I am quoted as saying in Ollie's blog post about his change of diet "Florence ponders diet change to break tournament duck" "...I don’t think there’s much rhyme or reason behind pre-match food routines though. Ollie should stick with his pre-match curries and keep on practising and he’ll get there. It’s about how you play on the course on the day that counts, not what you’ve filled up with on the night before." 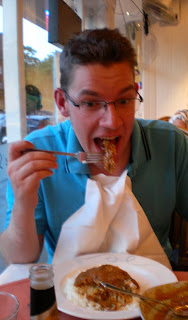 Great blog post! I'm pretty sure that much of your success was down to the duck curry. Maybe seeing Matthew Kelly outside the restaurant spurred you on as well. I wish I had been there. I like your use of the nickname "The Machine". Let's see if it catches on...