The tournament was played over five rounds, with 32 players competing for the title. The format of the event saw each competitor playing five 18-hole matchplay format matches through the day, with the player who won all five of their games being crowned the 2010 BMGA British Matchplay Champion.

Photo: The 32 Competitors line-up before tee-off 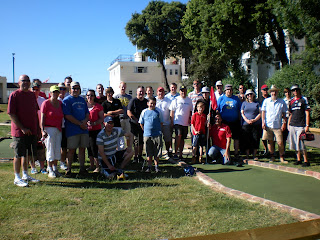 In round one Richard was drawn to face Welsh Ladies Number One, Cindy Kukielka from Cwmbran. After going one-down at the first hole, Richard recovered to take the lead and close out the match with a 3&2 win. The victory guaranteed Richard a top-16 finish. 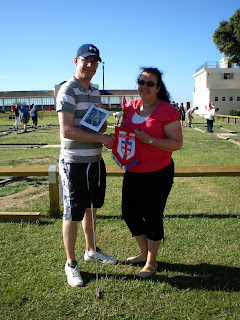 In match two Richard faced the British Minigolf Association’s current number one ranked player, Birmingham’s Chris Harding. With Richard leading for most of the match, Harding rallied with three holes-in-one on the last three holes to force a sudden-death play-off. Richard was able to win this and progress to round three, and the play-offs for the top eight positions. 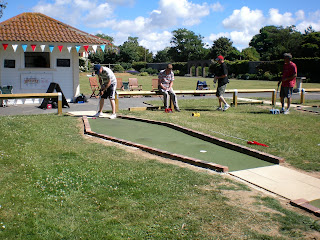 In match three Richard was drawn to play Cambridge’s Tony Kelly. This match again went the distance with Richard eventually winning one-up, and taking him into the draw for the top four places.

In the fourth match Richard faced off against London’s Brad Shepherd. In another close match Richard was able to force a play-off, which he won at the first-extra hole to set-up an appearance in the final against Sean Homer. 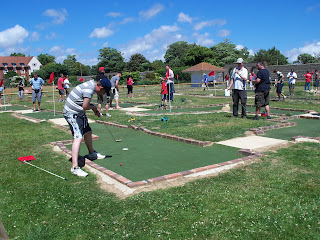 In the final Richard gained an early lead, which was pegged by Homer, who went on to take a four-hole lead. Richard managed to win back three-holes, but with the match at Dormie Two, Homer hit a hole-in-one on the 17th hole to seal a victory and leave Richard with his fourth BMGA Tour Career runner-up spot.

Richard said “I’m obviously disappointed not to have won, but Sean beat me with some great play and fine aces, I didn’t lose the match with poor play. My game was solid throughout the tournament and I made some great shots. Before the tournament my singles matchplay record didn’t look that great, but now with four more wins in a very intense competition it looks a lot healthier. The brand new course at Splash Point in Worthing is also very testing, and a perfect venue for a matchplay event. I can’t wait to play there again soon.”

In the Saturday night warm-up event for the BMGA British Matchplay Championships Richard took part in the first-ever Splash Point Strokeplay Competition and finished in 9th place with a two-round total of 87(+15), after scores of 47(+11) and 40(+4). Fifteen players competed in the Splash Point Strokeplay Competition, which was won by Brighton’s Anthony Pope, following a sudden-death play-off victory against Oxford’s Michael Smith, after both players had scored 67(-5) over the 36-holes.

Photo: The competitors line-up at the 2010 Splash Point Strokeplay Competition 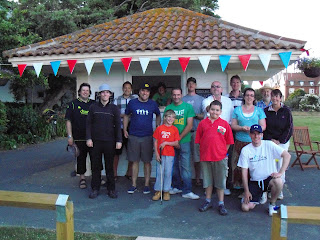 Well played Squire. I can't wait to hear what you had for dinner the night before that spurred you on to such success.

Read all about it here.