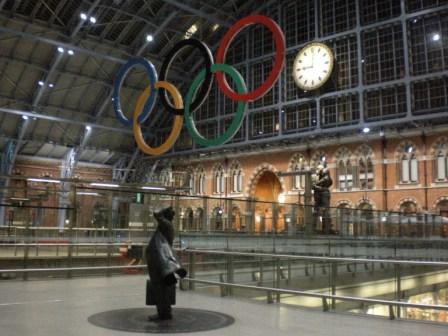 
Back in April the Olympic Channel suggested building a Crazy Golf course during isolation. It was nice to see the Olympic movement getting involved in the craze for Putting at Home during lockdown.


The World Minigolf Sport Federation (WMF) is the governing body for minigolf and has 63 member nations. There are currently a further three countries awaiting recognition as full members.

On the 12th January 2020 it was announced that AIMS had become a fully recognised International Olympics Committee (IOC) umbrella group.


As well as playing, organising and promoting sports I am also an avid collector of sporting memorabilia and ephemera. As such I'm a member of both the Olympin Club and Sports Philatelists International.


Miniature Golf and the Olympic Games


Did you know - Miniature Golf was once played during the Olympic Games!

While it was not officially part of the Games programme, the participants in the Golf tournament at the 1904 Olympic Games held in St Louis, USA also competed in a Putting Championship on a specially built miniature golf course.

The 9-hole Putting Course was specifically built at the Glen Echo Country Club for a Putting Championship and was constructed with electric lights surrounding the layout.

The Putting competition was won by Burt McKinnie of Normandie GC. McKinnie defeated Clement Smoot of the Exmoor Club in Chicago for the trophy after McKinnie scored a total of 21. Both players had been tied going into the last hole!

The 1904 Games were quite a wild affair - with a number of other sporting events taking place out of the scope of the 'official' sports. They also took place over several months and organised alongside the World's Fair, rather than as a standalone event.

We're hoping to visit and play the courses on our Crazy World of Minigolf Tour in the future.


Back in the summer of 2012 we were proud to be a part of the Oswestry Games. The festival of sport in Shropshire saw the sport of minigolf included in a multi-sport games event in the UK for the first time. The Oslympics consisted of more than 50 sports and cultural events held over ten-days in July 2012.