A look at the new Pitch & Plakks indoor minigolf game.

As a BIG fan of everything to do with minigolf I was excited to hear about a new game being launched by the Plakks team in Spain.


The creation of the Pitch & Plakks mini golf game has teed-off on Kickstarter and the campaign runs until Sunday 19th July.

Pitch & Plakks is the second game from the team at Plakks after they successfully launched the Plakks football game last year.

Emily and I are looking forward to creating interesting layouts and playing some Battle Games on the Pitch & Plakks course to continue our competitive isolation fun! 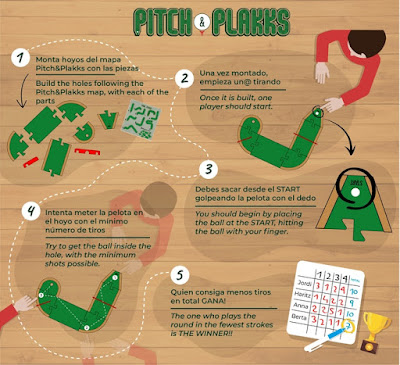 We've got a number of minigolf toys, games and board games in the Crazy Golf Museum and recently looked at some examples of Parlor Golf games from the 1930's.

The new Kickstarter campaign for the Pitch & Plakks mini golf board game launched yesterday, 9th June, and has already received 330 backers and more than doubled the original pledge goal! It’s superb to see so many people interested in playing the new minigolf game.

Check out the Kickstarter campaign for the new Pitch & Plakks minigolf game - there are only 11 days to go.

There are now only five days left to back the new Pitch & Plakks minigolf game on Kickstarter.