Playing the 400th course on our Crazy World of Minigolf Tour.


On Monday 23rd May we played the landmark 400th minigolf course on our Crazy World of Minigolf Tour. What began with a putt around an Adventure Golf course in Southsea, Hampshire has taken us all around the UK, as well as on a few jaunts overseas.


The 400th course played since we began our travels in September 2006 was the Breakers Realistic Miniature Golf course, which is part of the Les Mielles Fun Zone at Les Mielles Golf & Country Club in St Ouens Bay, Jersey.

The 18-hole Mini Golf course on the largest of the Channel Islands is the most Southerly course in the British Isles. It's also really really BIG! 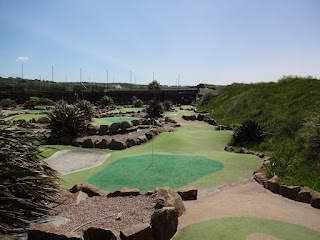 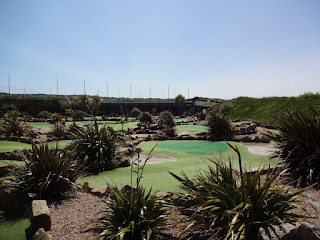 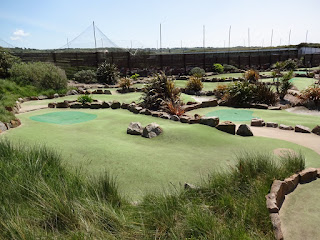 In our match-up in the Jersey Grand Prix I defeated Emily with a score of 58 to 66.


We visited on a Monday just before the peak season and so had the course to ourselves - a real treat. Some of the holes are very very very long indeed, so scoring a two was as good as a hole-in-one on some of the layout. Although there were definite ace opportunities to be had there.


Last summer we spent two weeks touring the South West of England and visited 62 courses. This year our gallivanting for minigolf has matched the easygoing pace of Jersey island life, but it was marvellous to reach another BIG minigolf milestone on our tour.

Playing the Les Mielles Miniature Golf course brought our total of course visits to 679. When we began our tour there were an estimated 600 courses in the UK! Sadly a large number of courses we've visited over the years have been unplayable for one reason or another. That's why in 2015 we visited the landmark 600th and 650th courses in Swanage and Padstow.

The 400th course we ever visited was at Salthouse Fields in Clevedon, Somerset in 2011.

You can also now sign-up to receive our miniature golf newsletter.
Posted by Richard Gottfried at Friday, May 27, 2016