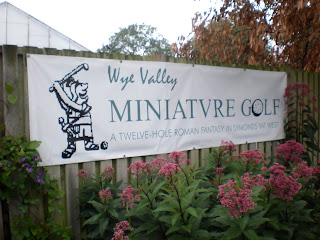 Following our visit to the Tredegar Park Minigolf course in Newport, Wales on Saturday 21st August 2010 we headed back over the border for a couple of rounds at the 12-hole Roman-themed Miniatvre Golf course at Wye Valley Miniatvre Golf in Symonds Yat West.

The course was the 193rd played on the Crazy World of Minigolf Tour, and also home to the final two rounds of the 2010 Cystadleuaeth Minigolff Cymraeg (Welsh Minigolf Tournament).

The course is great fun to play, with some excellent obstacles and well designed holes. I'd definitely return to play there again. 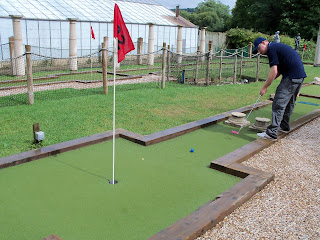 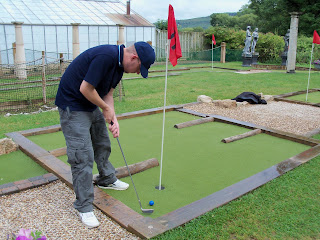 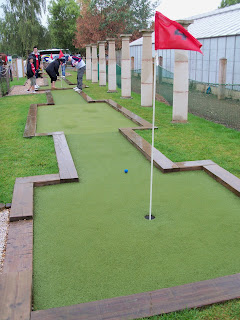 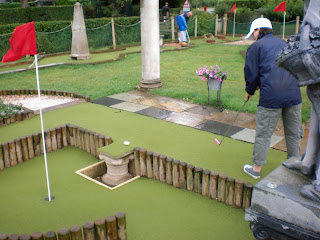 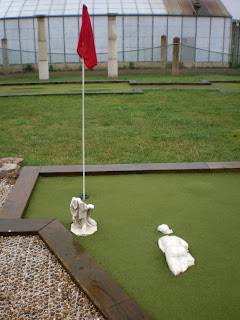 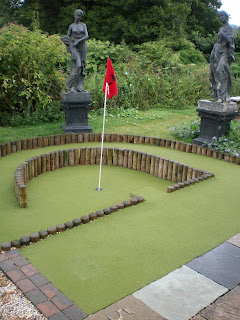 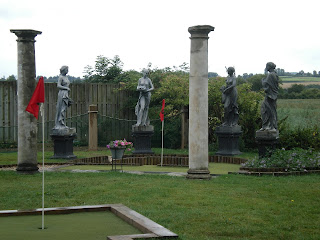 While at the course we talked with Lindsay Heyes, co-owner of the Wye Valley Miniature Golf course who kindly gave us some background history to his very well thought out course.

He told us that the Wye Valley Miniature Golf was opened on 11th September 2007, and he designed the course, while his brother Edward Heyes led the construction team. In the research stage they looked at 80 parameters which determine playability, from drainage and gradient to type of ball and gap-width between obstacles.

Interestingly the whole course acts as a water-collector for, and admits light to, the Wye Valley Butterfly Zoo as part of their environmental sustainability effort. Nearly all components were sourced from local suppliers - e.g. the colonnade was cast just a mile away from the course, where they had the columns distressed to age them two thousand years!

The concept was that the course would wind its way through a fictional excavation, complete with a grave, of a Romano-British villa engaged in the fellmongery business.

The centre also has an Amazing Maze (and Maze Museum), Butterfly Farm, Tea Room and Garden Centre, and makes a great location for a day out.

Richard Gottfried, Leo Kukielka & Owen Johnson try their hand at juggling(!?) at the Amazing Maze after the minigolf. 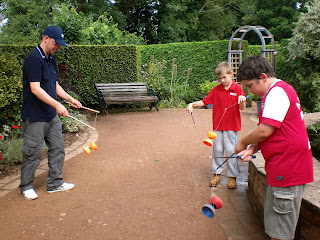 It was well worth a visit before, now I can't wait to return and have a game on the Laser Tag Battlefield!