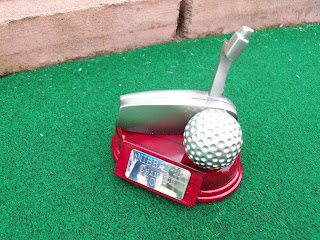 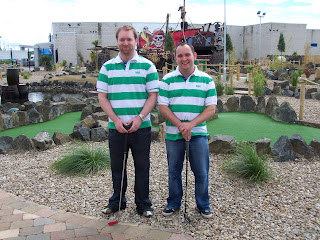 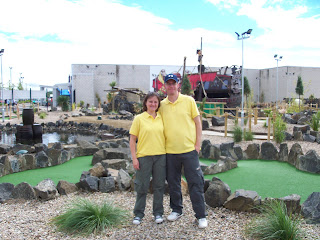 The NIBBAL-IT was played on four courses and comprised seven rounds, totalling 126-holes. The team tournament was won by the Bangor MGC with 47 points to the Luton Wanderers MGC's 32 points in the point-play system used to decide the NIBBAL-IT Champions. 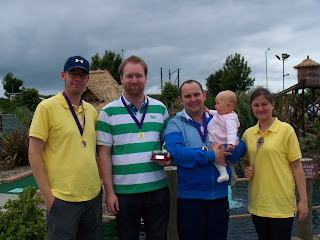 Craig McCallister, Co-Captain of Bangor MGC said "It’s nice to win, despite my great efforts not to. I look forward to the return leg in Luton."

Defeated tourist Richard Gottfried of the Luton Wanderers MGC said "What a fantastic tournament weekend in Northern Ireland. It was great to compete against such nice opponents in a fun, but very competitive tournament. The courses, the format of the competition and the quality of the players involved meant that the outcome was hard to predict. Mark and Craig's knowledge of the PAG course in Belfast, coupled with them being used to the inclement Northern Irish weather conditions certainly played into their favour. I can't wait for the 2011 NIBBAL-IT tournament now."

Emily Gottfried said "It was a really great tournament. All four course were challenging in their own way, so we all had a chance to take the lead during the seven rounds. Congratulations to Mark for his well-deserved win, and thanks also to Mark and Craig for a tough, but thoroughly enjoyable, doubles competition!"

The tournament began early on Saturday 31st July at the 18-hole Pirate themed Junction Jack's Adventure Golf course in Antrim, where the opening two NIBBAL-IT rounds were contested. After round one the Luton Wanderers MGC led by four points. After round two the score was ten points apiece.

Round three took place at the 18-hole Minigolf course at Larne's Carnfunnock Country Park. With Mark Swain winning the round with a score of 48(+12) to see the Bangor MGC take an overnight lead with 19 points to the Luton Wanderers' 15 points.

The day one standings were as follows:

Two rounds were played on the Blackbeard's Adventure course first, with the standings after four rounds with Bangor MGC ahead by seven points.

After round five Bangor MGC led by five points. In the individual standings Mark had lost his 10-shot lead and shared first place with Richard heading into the final 36-holes on the Captain's Challenge course.

After the sixth round Mark had regained the lead, which also helped the Bangor MGC extend their lead to 11 points.

The inaugural NIBBAL-IT Trophy and Title was eventually won in round seven on the 5th hole, and saw the Bangor MGC lift their first piece of sliverware since Mark Swain won the Top Local Championship at the 2007 BMGA Irish Open.

Photos and Videos from the NIBBAL-IT 2010. 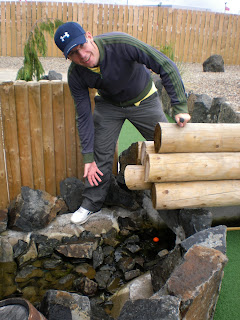 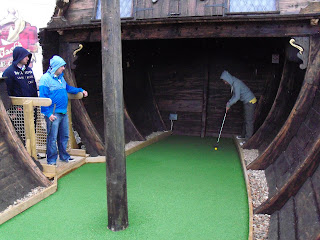 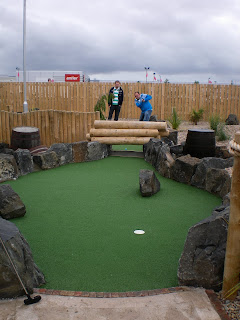 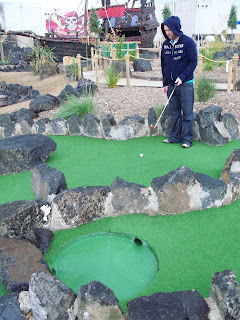 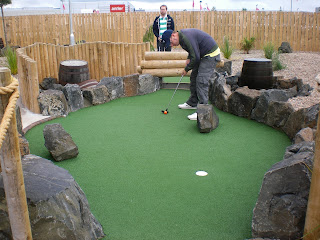 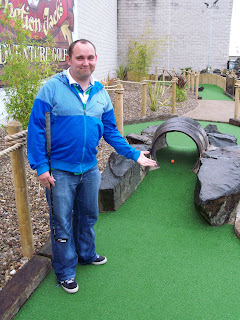 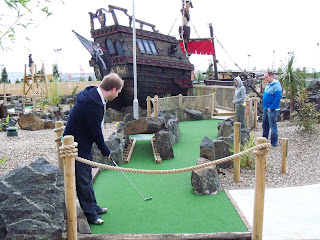 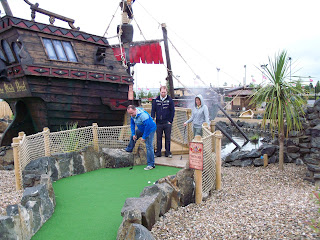 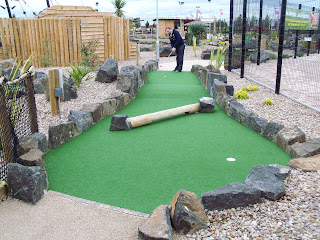 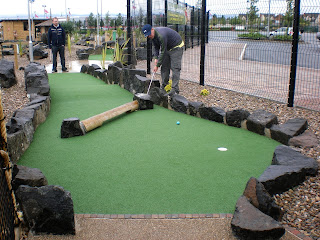 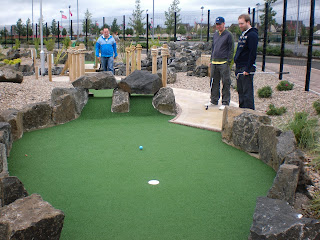 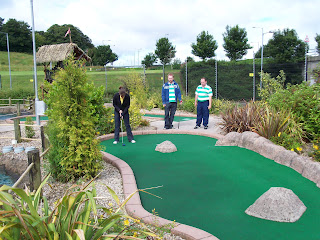 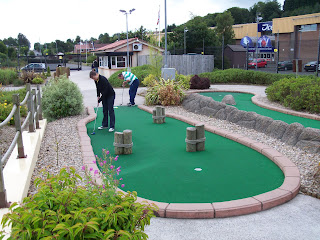 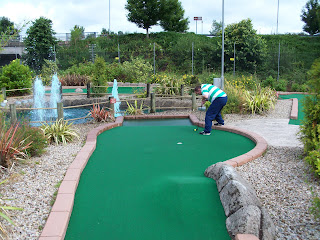 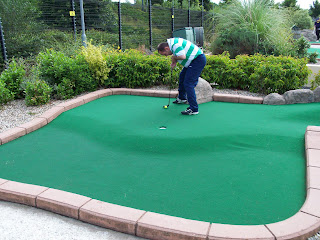 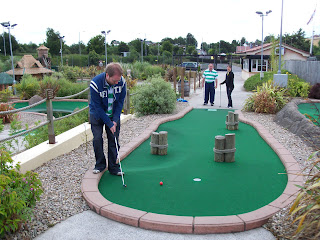 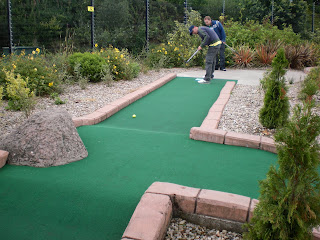 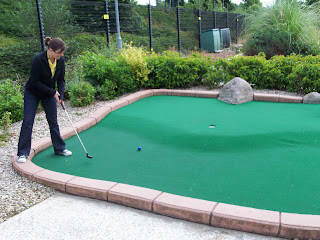 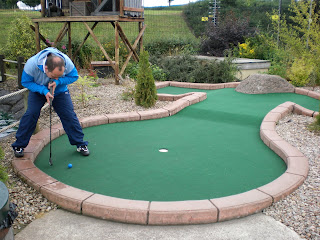 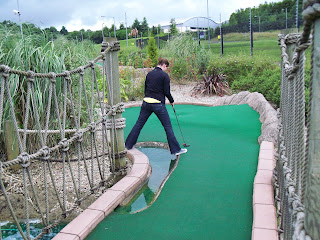 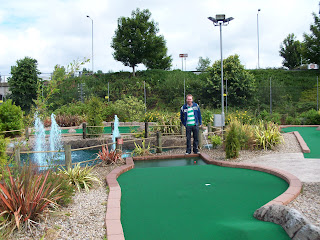 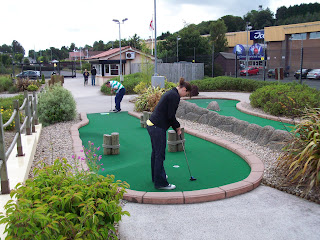 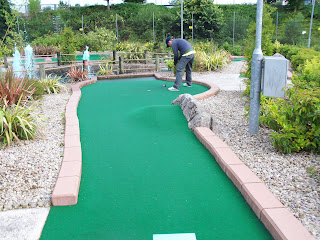 The prestigious title will be contested again at the NIBBAL-IT (Northern Ireland Bangor Bedfordshire and Luton - Invitational Tournament) in 2011.
Posted by Richard Gottfried at Tuesday, August 03, 2010

Looks like a fun tournament. Congrats to all! The Belfast course looks extremely similar to a course in Fairhaven, Massachsusetts where the Massacusetts Open was held for a few years. Some of the hole designs are almost exactly the same. The only thing you are missing is a Lighthouse!

Yes, it was a great tournament - highly competitive and good fun.

Some of the water effects at Belfast were great, Mark seemed to be hit by every bit of cannon fire - both at Belfast and in Antrim!