A revisit to the Arnold Palmer Putting courses on North Parade in Skegness.


In May 2011 we visited Skegness as part of a road trip along the Lincolnshire coast. In May 2015 we returned for some more fun and games in the seaside resort.


When we arrived on the Friday afternoon we had a wander along the seafront to see what had changed with the minigolf courses.

This time we played the two Crazy Golf courses as part of the Skegness Minigolf Championship that took place on National Miniature Golf Day! We returned on the Sunday to play the grass Putting course. 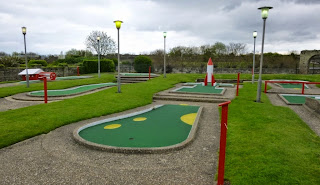 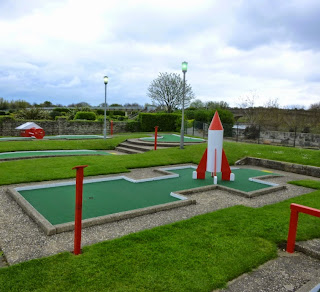 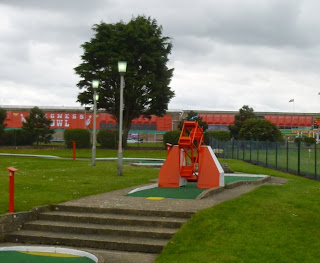 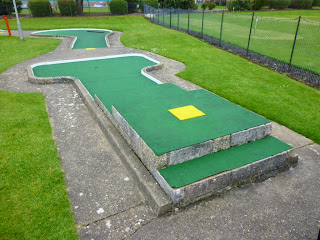 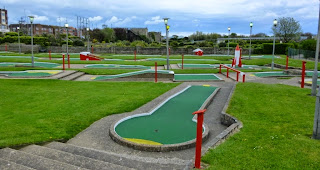 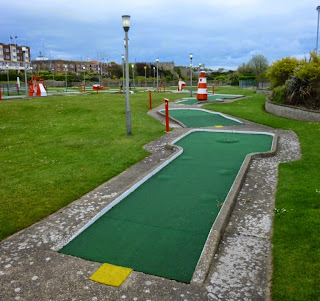 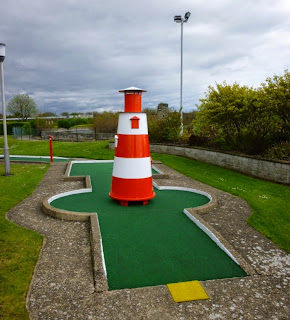 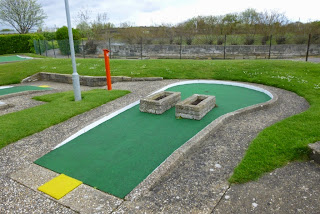 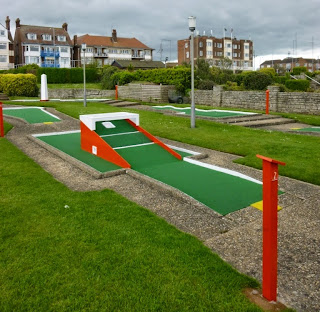 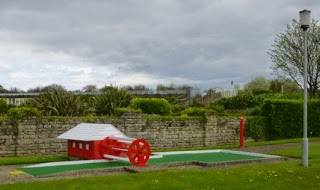 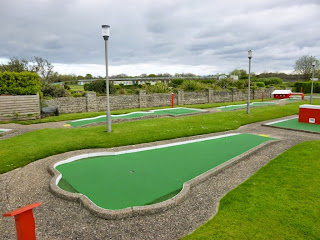 The courses were originally the 234th, 235th and 236th played on the Crazy World of Minigolf Tour.

Arnold Palmer Putting Courses are my favourite type of Crazy Golf courses. There's a certain something about them that strikes a chord with me. I really enjoyed seeing the scorecards in use at the course too - they carry a lot of minigolf history!

Pirate Mini Golf at the Galleria Shopping Centre in Hatfield

Visiting the Pirate Adventure Golf course at the Galleria in Hatfield.


On Tuesday 19 May I headed over to Hatfield, Hertfordshire to meet up with my old mate and Dodgeball rival 'Rowdy' Russell Fenner for a game of minigolf on the Pirate Adventure Golf course at the Galleria Outlet Shopping Centre.


It had been open when I first arrived. While the Galleria is open from 10am to 8pm on weekdays, the Pirate Adventure Golf course is only open 10am to 6pm Monday to Saturday, and 11am to 5pm on Sundays. Looking on the website it does state that the last entry is 30 minutes before closing.

The result of our contest was put down as a no-score draw.

For more information on the Pirate Adventure Golf course and the Galleria shopping centre check out the links below.

The course was the 599th visited on the Crazy World of Minigolf Tour since September 2006.

In June 2014 we played a similar layout from the same group when the course was 12-holes.


On Sunday 10 May 2015 we visited the Lost World Adventure Park on North Parade in Skegness. Unfortunately it'd closed down. The Lost World had been home to an indoor Jungle 3D Glow-in-the-Dark Mini Golf course.

The course location was the 598th visited on our Crazy World of Minigolf Tour.


Luckily there are many other miniature golf courses to play in Skegness.

Link:
- Lost World Adventure Park on Facebook
Posted by Richard Gottfried at Tuesday, May 19, 2015 No comments:

New Free From Cakes at Tesco

I noticed that Tesco has some new gluten and wheat free cakes in the Free From section!


I'm looking forward to an occasion to try them out.

Links:
- Tesco Free From
- Coeliac UK
Posted by Richard Gottfried at Tuesday, May 19, 2015 No comments:

The America Ground in Hastings

Finding out about the America Ground in Hastings.


I've been visiting Hastings, East Sussex since 2007 and spend quite a few days a year playing Crazy Golf there. On my most recent trip for the British Minigolf Championships I stayed in a hotel on the seafront in the old Victorian Town Centre for a change. While walking back on Friday evening I noticed a big painting and a plaque on Robertson Passage with some very interesting history on the area!


The area - formed as a new piece of land after storms hit Hastings in 1287 - was out of the control of Hastings Borough and in 1822 had become home to around 1,000 people. In defiance of action by Hastings Borough to collect taxes and rent, the residents of the area declared themselves independent from Hastings and the 24th US State!

Related blog posts:
- Hastings
- Plaque-ing Interesting
- The Piece of Cheese Cottage in Hastings
Posted by Richard Gottfried at Monday, May 18, 2015 No comments:

A revisit to the Jolly Roger Adventure Golf courses in Skegness. 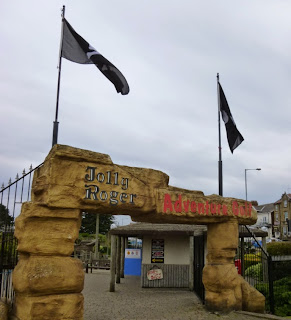 On Friday 8 May 2015 we revisited the Jolly Roger Adventure Golf courses on the Grand Parade in Skegness, Lincolnshire.

The Skull Trail and Treasure Trail courses at the Jolly Roger Adventure Golf were the 237th and 238th played on our Crazy World of Minigolf Tour back in May 2011. During our visit this time it was good to see the course still proving popular with visitors to the town. 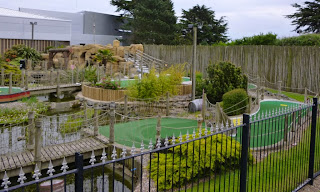 For more photos of the course check out the blog post from our previous visit. 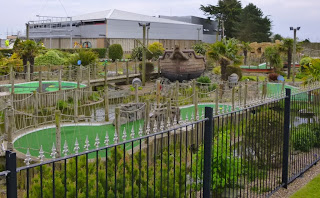 The layout is of a similar design and build of the Treasure Island courses in Southsea - where our tour of the UK's courses began back in September 2006.

- Crazy World of Minigolf Tour
- Skegness
Posted by Richard Gottfried at Monday, May 18, 2015 No comments:

Minigolf report from the BMGA British Championships in Hastings

On the 16th and 17th May Leagrave minigolfer Richard Gottfried competed in the BMGA British Minigolf Championships on the 18-hole Pirate Adventure Golf course on Hastings seafront.

Richard said “I’m pleased to have scored par or better in each of the nine-rounds and I made a lot of holes-in-one which was nice.”


The BMGA British Championships was won by Oxford's Michael Smith with a score of 253(-71).

In Friday’s Midlands Minigolf Club Doubles contest Richard and team-mate Ruth Burke were runners-up to John Moore and Brenda Smith, with the pair scoring a combined 66 to finish one-shot behind the winners.

For the second year in a row Richard was the winner of the British Championship Hole-in-One Challenge shootout.

Later this season Richard and Emily Gottfried will be competing in the Splash Point Open in Worthing and the World Crazy Golf Championships in Hastings.
Posted by Richard Gottfried at Monday, May 18, 2015 1 comment:

It didn't take long for the seagulls of Hastings to make a home on the roof of the new advertising trailer at Hastings Adventure Golf!


One of the perils of playing minigolf at the seaside are seagulls. If they're not pooing on you or the course, they're after your chips and in the case of some players even their balls!

While in Hastings for the British Minigolf Championships some of my friends and minigolf rivals kindly let me know that Trattoria Italiana on Pelham Crescent on the seafront had gluten free options.

When I went for a look I noticed a funny typo on the menu board!


My friend Marion spotted it too. She also asked if Gluteen was some sort of sub-category in the world of Coeliac Disease?

Gluten is a protein found in wheat, rye and barley and so appears in a lot of food and drink. If people with Coeliac Disease ingest gluten it causes the body's immune system reacts by damaging the lining of the small intestine. For more information about Coeliac Disease visit the Coeliac UK website.

During Coeliac Awareness Week I was once again minigolfing gluten free. Last year I played in the BMGA British Minigolf Championships at Strokes Adventure Golf in Margate, Kent. Check out my blog about the experience.

Links:
- Coeliac UK
Posted by Richard Gottfried at Monday, May 18, 2015 No comments:

Report from the 2015 National Miniature Golf Day Championship in Skegness.


The Saturday of our Skegness Seaside Weekender happened to be the same day as National Miniature Golf Day - so what better way to celebrate it than by playing five minigolf courses in the UK's top spot for the game.


Skegness currently has 110 miniature golf holes spread over ten Crazy, Mini, Adventure, Putting and Pitch & Putt courses! The most of any town in the UK.

National Miniature Golf Day is a quasi-official holiday that began in the USA. It takes place on the second Saturday in May each year.

Holiday on the Buses Reunion Mini Golf Competition in Skegness

Report and results from the Holiday on the Buses Reunion Mini Golf Competition in Skegness.


On the last day of our holiday weekender in Skegness, Lincolnshire we visited the Arnold Palmer Putting Courses on North Parade to complete the two-day Skegness Minigolf Championship. The one-round played on the 18-hole Grass Putting course was also a chance to play the Holiday on the Buses Reunion Mini Golf Competition with local competitors Eric Huckle and Steven Huckle.

In September last year we competed in 'The Butler Cup' On The Buses Fan Club Crazy Golf Tournament on the 18-hole Arnold Palmer Minigolf course in Prestatyn, Wales, and we'd planned to meet-up with our friends from the fan club when next in Skegness. In the Prestatyn event Emily had won the 'Pro' category, with Eric winning the 'Am' title.


It was a great fun event on a marvellous minigolf Putting course. We're looking forward to visiting Skegness again in the future.

Link:
- On the Buses Fan Club
Posted by Richard Gottfried at Thursday, May 14, 2015 No comments: