Unfortunately the annual Paradise Island Adventure Golf Open Championship will not be taking place at the current time. 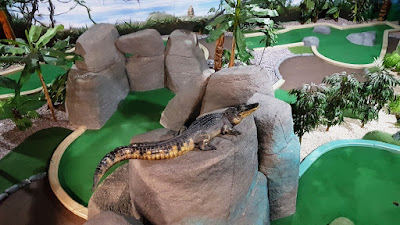 The annual large participation event was due to tee-off today and run until close of play on Sunday.

The decision is understandable, but we're really looking forward to playing in the event again in the future.


The team at Paradise Island Adventure Golf are hoping to reschedule the event later this year.


Emily won the Paradise Island Adventure Golf Open Championship at the Trafford Centre in Manchester last year, while I won the 2018 competition.


Emily scored a course record of 30 on the Temple Ruins layout - the course par is 42 - which was enough to fend off the challenge of thousands of other players who competed over the four-day event. Her round included seven holes-in-one on the 18-hole course.


The annual PIAG Open competition takes place across the brand's eight venues and is the largest Open minigolf tournament in the UK with thousands of players competing across three age categories at each venue.


All of the Paradise Island Adventure Golf centres have now reopened following lockdown and have social distancing measures in place.