Hopping aboard the SEGA Mega Drive Mini Bus in Manchester.


Last week I heard that the SEGA Bus was hitting the road again!

My brothers and I went on one (a lot) when it stopped off at Barry Island Holiday Camp in the early 90s.


It was such a fun thing to do and I remember we played challenge games of Sonic the Hedgehog for prizes as well as receiving goody bags for visiting. Once we left the bus we immediately joined the queue to get on board for another game of Sonic on the Mega Drive.


The version of the double decker bus that called in to Manchester on it's week-long tour housed a number of the new SEGA Mega Drive Mini consoles and allowed players to have a go on the system's 42 games. I played Road Rash II, Darius and Street Fighter II: Special Champion Edition. 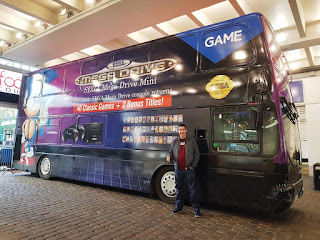