A visit to Puttshack super tech mini golf at White City in London.

We celebrated my birthday with a game of super tech mini golf at Puttshack while down in London. It was the first time we've played a course using technology-enabled balls.


We played a round on the Emerald course - one of four 9-hole layouts at Puttshack.

Once you place your ball on the tee you have to wait until the lights go green before teeing-off. You've then got one minute to play the ball.


Time is against you on each subsequent putt and the quicker you play, the more points you'll pick up. However, accuracy is required and so you still need to get the ball in the hole in the least shots possible. 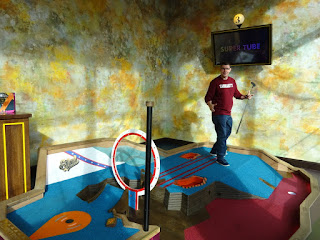 There are also 'Super Tube' holes on the course which give you a nice route to the cup and are the best chance for a hole-in-one. Emily managed to hit two aces during our game.


Hole 8 was interesting as there were three routes to the cup - the tricky Super Tube, a tunnel to the left and a tunnel to the right. Which tunnel you putted through depended on whether you knew the answer to a question that appeared on the screen when you placed the ball on the tee. Luckily I got my question right and picked up some extra points, while Emily was incorrect and dropped ten points. 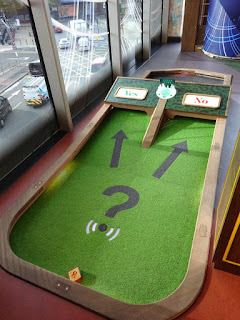 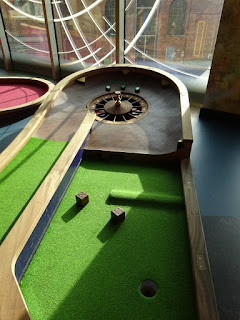 
Unfortunately there aren't any scorecards to take away with you after playing at Puttshack, nor are your scores emailed to you. It's a real shame as we didn't take note of the number of strokes on each hole, or the points we picked up along the way. According to the screens Emily took 17 shots while I played 19 strokes. 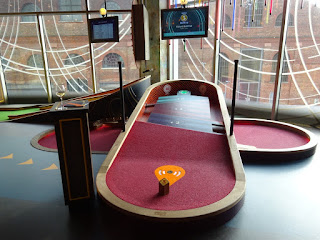 After our game we had some drinks and Emily enjoyed some food at the venue. It was nice to see branded wet-wipes at the course, one of which is now in the Crazy Golf Museum's vaults.

I first visited Puttshack while in London last December. The Christmas party season was in full swing and the courses were heaving!

Puttshack White City was the brand's first location and opened at Westfield London in 2018. The second Puttshack opened at intu Lakeside in August this year. The new Puttshack at Bank is due to open on Saturday 23rd November. There are also plans for a new Puttshack to open in Watford next year. For more information visit the Puttshack website.