A look at the courses at Tantogårdens Bangolf in Stockholm, Sweden. 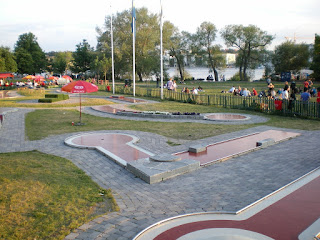 Back in June 2011 Emily and I traveled to Stockholm, Sweden to play for Great Britain in the WMF Nations Cup international minigolf tournament.

The tournament was held on the Concrete aka Beton and Miniaturegolf aka Eternit courses at the Tantogårdens BGK at Tantolunden Park in Södermalm, Stockholm.

The Beton course was the 250th we played on our Crazy World of Minigolf Tour.

The Eternit course was the 251st we played on our Crazy World of Minigolf Tour.


The World Minigolf Sport Federation is the umbrella organisation of 63 Minigolf sports associations worldwide with continental associations in Africa, America, Asia, Europe and Oceania. There are more than 38,000 competitive minigolf players registered with the WMF via the 63 member nations, with 900-plus clubs between them. Over 1,000 courses are approved for official competitions and over 1,500 minigolf tournaments are held each year.

Emily and I have competed in a number of international WMF events, including the Nations Cup in Finland and Sweden and the World Adventure Golf Masters in England.

Emily holds the British women's record score on the Miniaturegolf (Eternit) format of the game after scoring a round of 24 (-12) on the 18-hole course at the 2011 WMF Nations Cup.