A visit to the Lakeside Miniature Railway in Southport


We'd forgotten there was a miniature railway in Southport, so it was a nice surprise to see it when we parked up near to Marine Parade Station next to the pier.


Unfortunately we were just on the wrong side of the season to have a ride on it.


The trains on the Lakeside Miniature Railway run from the Marine Parade Station alongside the pier, passed the BMX and skate park, near to the Pitch & Putt course and the beside the lakes as it makes its way to the Pleasureland station. We had a nice walk along the route.


We also spotted there's a Model Railway Village in Southport. Unfortunately the last day of the season there was the week before too.


We did have a great time promenading in the seaside town and got to play and revisit the Crazy Golf courses there, as well as have a drink in the Smallest Pub in Britain! 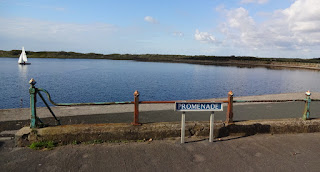 You can now sign-up to receive our miniature golf newsletter.
Posted by Richard Gottfried at Sunday, October 16, 2016