On Saturday 18th December Luton Minigolfer Richard Gottfried travelled to the Green Indoor Mini Golf course in Hither Green to compete in a 24-player field facing off for the inaugural Green Open title.

In the 2009-2010 BMGA Order of Merit Rankings Richard finished the year in a career-high end of season ranking of 11th of 98 players with a total of 3,885 points. This was up on last year when he finished in 16th spot of 74 players. Between July and August Richard was ranked as high as 7th in Great Britain.

After the event Richard said “Unfortunately I didn’t end the season with a win or a top ten finish, but 12th place on possibly the toughest course in the UK isn’t too bad. It’s been a long season and I’m pleased with the effort I’ve put in, which has paid off with the rankings I’ve achieved.” 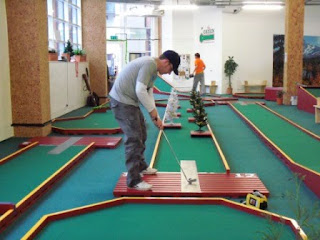