The London-Lu(x)ton Connection play in the 'World Series of Pong' Ping Pong Tournament in Tooting! 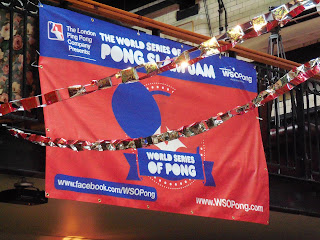 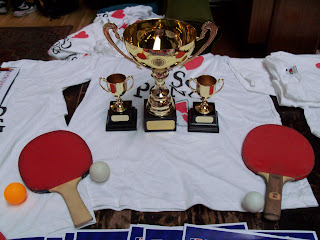 The competition saw teams of two play first-to-nine-points matches, with the final match played in a best-of-three games format. Our team - The Luxton & District (aka The London-Lu(x)ton Connection) - lined up to face-off against 49 other teams who had won through the qualifiers, and some other 'Wildcards'. We were drawn in Group C, playing on Table 1, alongside the teams of Bjorn Again, Team Chris & Mike and The Maccabees.

With costumes and fancy dress a big part of the World Series of Pong we had gone for an 'On The Buses'-themed Team Name and Kit. However, the snowy weather meant that our team outfit remained in Southsea, and we had no time to source a new kit. Brad did however manage to find some Native American Indian Head-dresses in a Tooting Charity Shop 30 minutes before play began, which, while making us look like a couple of extras in a Village People video, did at least distract some of the spectators away from our play and allowed us to roll-out some "How" 'jokes', along the lines of '"How"...the bloody hell are we going to win this match', and '"How"...are we supposed to play in such unwieldy headwear' etc. etc. Another came from Brad, who had 'Reservations' about the hats - bah dum chaa. 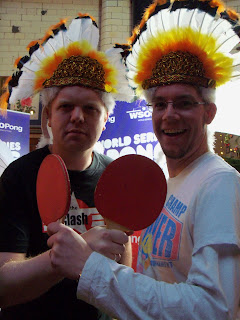 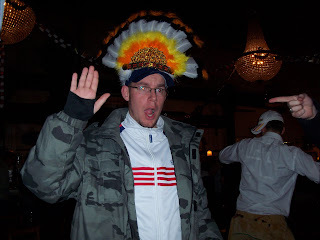 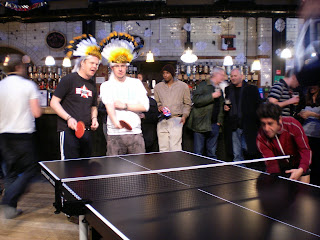 After the defeat Brad and I picked ourselves up, adjusted our Native American Indian Head-dresses and got ready for match two, this time against two members of the Indie Band The Maccabees. In this match we won the rally to serve first, and went on to be on the receiving end of a 9-3 defeat. Heartened by the winning of three points we had some confidence heading into our third (and final) group match.

Up against the team of Chris & Mike we decided to switch ends, and with the glare of the lights from the high ceiling at the Tooting Tram & Social bar now behind us, we managed to take the lead, only for Chris & Mike to draw level, and eventually take the victory 9-7.

Bjorn Again look on as we play our final group game 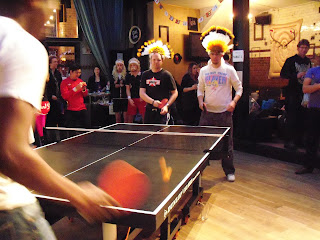 The event also hosted exhibition displays from some of the best of England's Table Tennis talent who put on some spectacular matches, and also took on challenges from the WSOPong players.

Many thanks to Andrew and all the team at the WSOPong organisation, who ran a terrific event, and allowed Brad and I to compete in the WSOPong Grand Slam Final as one of the 'wildcard' teams. 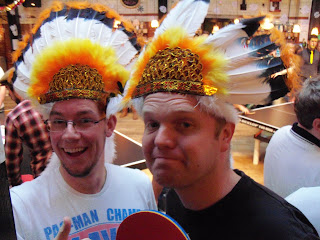 Brad, Emily (our Coach) and I had a brilliant time (despite stinking up the tournament with our Whiff Whaff skills). And, at the end of the day at least we can say we were slaughtered 9-0 by the ultimate champions! 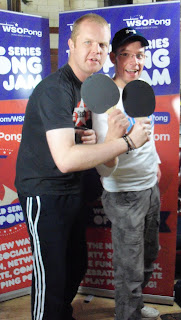 Brad has now officially retired from the sport - although he did enjoy the social/drinking aspect of WSOPong (and did finish the day with a smile, as he got a free dinner at a Pub we visited on our Saturday-night Tooting Pub Crawl after the tournament - where we also found 'Pints o' Sausage Rolls' for sale!?).

As for me, I will be back for qualifying in 2011! I've just got to find a new partner, a new kit and a lot more time to practice my game.

The aim of WSOPong events is to have fun in a social setting and the WSOPong competitions are targeted at casual, social players, or people who perhaps played many years ago, or not at all (the WSOPong don't target current, or former Club players, or Professionals).

About the World Series of Pong.

Last December Brad and I attempted to break the Guinness World Record for 'Most Brussels Sprouts Eaten in One Minute' - we failed in our pursuit of that 'World Title' too (although we did defeat celebrity entrant Esther Rantzen in the sprout scoffing).

Our regular sport to participate in is Minigolf (and Crazy Golf), but we also like to take the odd diversion into other obscure sports and games - with Brad a keen World Conker Championships competitor, while I am a keen Dodgeballer and Finger Jouster. Last month Emily and I also competed in the 4th UK Rock Paper Scissors Championships in Fulham.