Luton Minigolfer Richard Gottfried represented England for the fourth time since his debut in 2007 as he competed in the eighth annual Castle Golf World Crazy Golf Championships at the Sea Front Adventure Golf Complex in Hastings on Saturday 30th and Sunday 31st October. 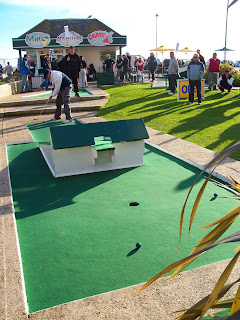 For the third consecutive year Richard made the ‘cut’ to qualify for the final round to finish in 17th place of 54 competitors. Richard also finished 17th in 2008 and 2009.

The competitors played six qualifying rounds (four on Saturday, two on Sunday) on the 18-hole Arnold Palmer Crazy Golf course, with the top ranked 18 players making the cut to take part in the final round. After the six qualifying rounds, Richard and London’s Nick Chitty were tied on a score of 210(-6), which meant a play-off was required to see who would take the 18th and final place in the seventh round. The sudden-death play-off was won by Richard on the 5th extra hole, after BMGA British Number One Chitty scored a three, with Richard hitting a two.

The overall winner of the World Championships was Birmingham’s Chris Harding, who took the title for the second time following his win in 2007. Second was Brighton’s Peter Emmerson, with Oxford’s Michael Smith in third place. Harding won with a seven round total of 222(-30). (Videos of the final hole of the final round - 1 & 2)

Richard’s seven round total was 249(-3), an average of 1.97 shots per hole, after rounds of 34, 34, 35, 36, 36, 35 and 39. He said “I was very pleased with my performance over the weekend, I qualified for the final, after a nervy sudden-death play-off win and then managed to gain a place to finish 17th for the third year running. I only dropped 12 shots all weekend, and was a bit unlikely to miss out on a few more Aces, as I was getting very close quite often. Congratulations to Chris for a well deserved victory.” 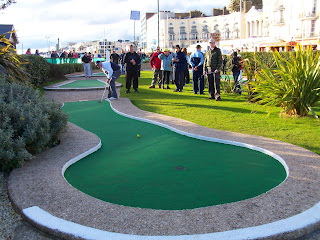 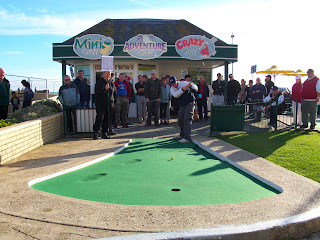 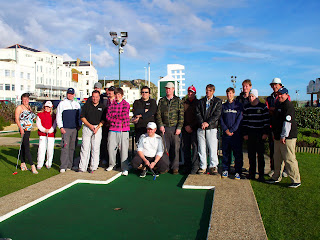 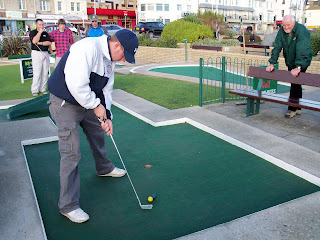 Prior to the main-event Richard and Emily were invited to compete in the “www.miniaturegolfer.com ‘Ten Best' Crazy Golf Championship” to celebrate the tenth year of the Miniaturegolfer.com website. The competition was held on Friday 29th October and took place over the ten hardest holes on the Crazy Golf course. In the field of 13 players Richard finished in tied fourth place on 20 (par). Emily was tied in tenth place on 23(+3). Michael Smith took the win following a play-off victory over Ted McIver after both players scored 18(-2). 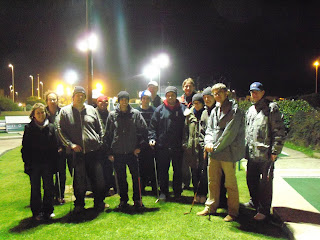 Richard is now ranked 26th of 260 players in the Castle Golf World Crazy Golf Rankings for 2003-2010, Emily is 55th. The BMGA Order of Merit and BMGA Season Only Rankings will be published later this week.