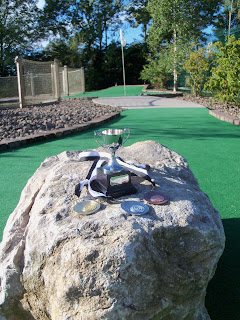 On Sunday 12th September Luton Minigolfers Richard and Emily Gottfried headed to Newcastle to compete in the inaugural Newcastle Open minigolf competition. The two-round tournament was played over 36-holes at the Mini Golf course at Gosforth Park.

Ten players competed in the event, with Richard finishing in 3rd place following a sudden-death play-off to decide the champion after three players tied on 79(+7) after regulation play. Newcastle’s Simon Hardie won the event after scoring a two on the first hole of the play-off, with Gottfried and Wallsend’s John Moore both scoring threes. The 2nd/3rd place play-off was decided on the 6th hole, with Moore hitting a two and Richard only able to manage a three. 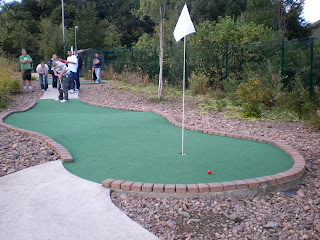 The score of 38 achieved by Gottfried, Moore and Hardie is also a new course record at the Gosforth Park course.

Richard said “The Newcastle Minigolf Open was a great event, and there was some great local talent competing too. The Gosforth Park course was a good test of Putting ability. We are looking forward to returning north in 2011.”

Results and report from the 2009 Newcastle Invitational Tournament.

Check out the sports section of the Luton News (15th Sept 2010) for a full report of my third place finish in the Newcastle Open minigolf competition.