Luton Minigolfer Richard Gottfried was in action in two minigolf tournaments in Hastings, East Sussex over the weekend, as the 18-hole Adventure Golf course at White Rock Gardens played host to the BMGA Players Championship and the BMGA British Open. 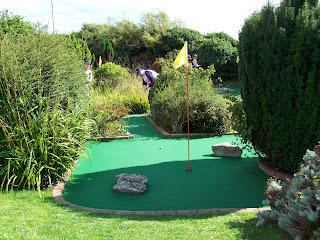 On Friday 17th September Richard tied for 11th place in the 29 strong field at the BMGA Players Championship with a round one score of 37(+1), one shot off making the cut to the second round. Brighton’s Peter Emmerson was the eventual winner of the competition.

In the two-day BMGA British Open, Richard made the cut for the second day for the fourth consecutive year with rounds of 38, 43, 40, and 35 for a first-day total of 156. His round of 35 (-1) was a new personal best on the Hastings course.

In the fifth round Richard scored a 33(-3) to record a second personal best, and ended the tournament with a 40 to card a 6 round total of 229 (+13) and finish in 28th place in the 56 strong field. Richard was also ranked 16th of 41 British Players in the tournament.

At the top of the rankings Sweden’s Eirik Seljelid lifted the trophy with a 7 round total of 229(-23), in second place was Finland’s Jouni Valkjärvi, with London’s Nick Chitty in third place.

Richard said “It was a great tournament weekend and I’m pleased with achieving the new personal best scores. I was a bit disappointed with my play though, it was very good at times, but was certainly lacking at others. After a poor start I was definitely more of an enhancement talent at the event rather than a contender, but my round of 33 in the British Open was a highlight, and I was only just outside qualifying in the Players Championships on Friday. I’ve got more practice to do and improvements to be made in my game before the next big event.” 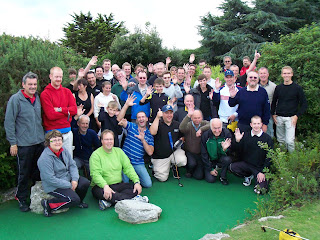