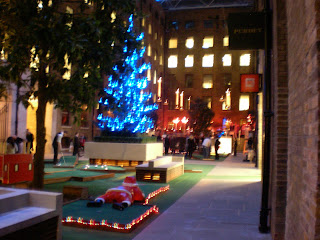 On Thursday 10th December 2009 eleven of Great Britain’s finest minigolfers, along with a New Zealand Crazy Golfer, descended on the temporarily Christmas-themed Minigolf course at Devonshire Square in London to compete in the 2009 Christmas Crazy Golf Challenge. 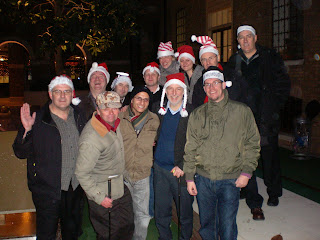 The 2009 Christmas Crazy Golf Challenge competition took place over 17-holes and the event was won by Brad ‘The Fist’ Shepherd of the London Minigolf Club. Brad’s score of 41 (+7) was four shots clear of his nearest rivals, the duo of Nick 'Top Hole' Chitty and 'Stormin' Alan Norman who tied on 45 (+11) after the 17-holes of regulation play.

The tie could not be decided on holes-in-one either as both Alan and Nick had scored two Aces apiece. A sudden-death play-off would decide the winner, and it was reigning Kent Open Champion and Planet Hastings Crazy Golf Club member Nick Chitty who claimed the runner-up spot at the second extra hole (The Ferris Wheel). 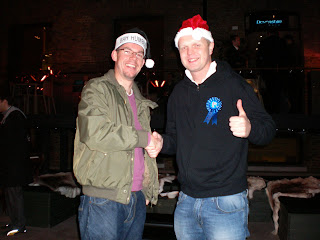 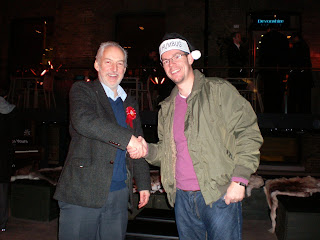 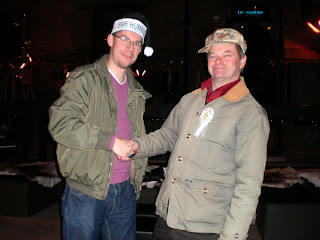 4th place was also decided with a play-off, as Jon ‘The Stance’ Angel defeated Lionel ‘The Spoon’ Bender after both had tied on 47 (+13).

In 6th place was Luton’s ‘Squire’ Richard Gottfried with a score of 48 (+14). London’s David ‘Man of Question’ Corkett was seventh on 52 (+18), Surrey’s Trevor ‘Trevino/Lord of Smeeth’ Robertson picked up another minigolf competition top-ten finish this year (following his 6th place in the MiniatureGolfer.com '9 Best' Crazy Golf Championships in October) with 8th spot.

Tied in 9th place and deciding against a play-off were Martin ‘Smashing’ Robertson and Emily ‘Coach’ Gottfried, who both scored 54 (+20). Reigning BMGA British Master Chris ‘Stretch’ Jones was 11th after hitting a 55 (+21).

Picking up the wooden spoon with a score of 58 (+24) was New Zealand’s Kelly Maaka, who was playing in only her fourth minigolf competition, following the New Malden Invitational, Motspur Park Classic and a Minigolf Doubles Match at the Jurassic Encounter back in March 2009. 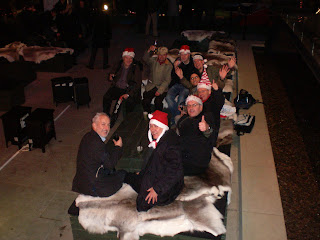 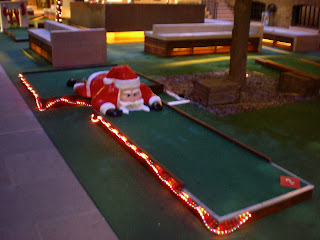 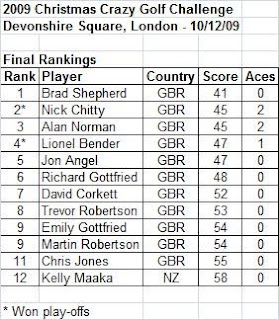 Link to a blog post about other Mini Golf, Crazy Golf and Adventure Golf courses in and around London.
Posted by Richard Gottfried at Friday, December 11, 2009

Very cool. Love the themed minigolf courses. Have seen a ton of Halloween ones but few winter/Christmas ones (though Disney has a good one).

Haven't played a Halloween course yet.

The Christmas theming was quite good. Though poor old Father Christmas was a bit unfortunate as the ball is hit through his mouth and comes out of his...@$$!!!

What other type of 'Season-Themed' courses could you have?

Check out the latest blog post from the team at PutterFingers.co.uk 'Festive Crazy Golf Competition anyone?'

The blog post also has details of a 9-hole Christmas Minigolf Course that is in Manchester's Piccadilly Place in the run-up to Christmas - Chrizy Golf.