Ever heard of the Luton Bun? Neither had I until I read the Simply Sims column (page 6) in the Luton News on Wednesday (2nd December)! 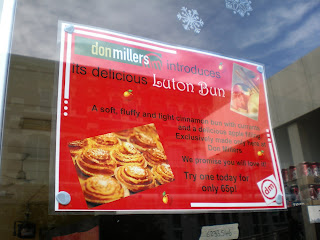 It's on sale in Don Millers bakers in Luton Town Centre and is priced at 65p for one, or two for £1.20, and is described as "A soft, fluffy and light cinnamon bun with currants and a delicious apple filling."

While in town today we popped into Don Millers to sample the Luton Bun, which the owner of the shop has named in honour of the town and to his customers who have supported his business over the last 22 years. His inspiration was taken after seeing many types of food named after their place of origin such as Eccles Cakes and Melton Mowbrey Pies. 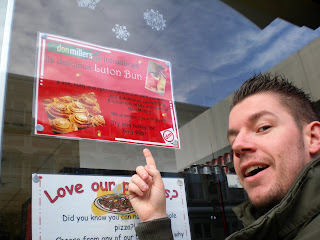 Unfortunately as a Coeliac I couldn't partake in the eating of the cake (though I support its introduction as it's a great example of a business creating something new that is linked to the great town of Luton), so it was left to Emily to try it out. And her verdict? Emily says "The Luton Bun was nice, if a little dry. But when you got a bite with the fruit it was really tasty." 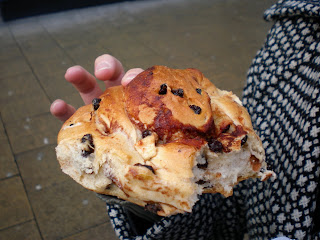 My World of Bun Throwing blog also cropped up in Simply Sims search into the Luton Bun and gets a mention in the story!

I'll have to have a go at making a Gluten Free version of the Luton Bun, either that or see if Don Millers would be able to make one using their 'secret recipe'!

Another great Bedfordshire dish is the Bedfordshire Clanger - a suet pastry which is both a savoury and sweet dish in one.
Posted by Richard Gottfried at Saturday, December 05, 2009