By visiting the Christmas-themed Minigolf course at Devonshire Square in London for the 2009 Christmas Crazy Golf Challenge competition I also hit somewhat of a 'milestone' on the Crazy World of Minigolf Tour as it was Minigolf Course Visit 199(b) and the 155th (and a bit) course I've played since September 2006! 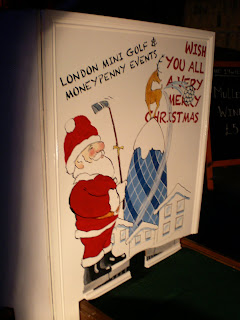 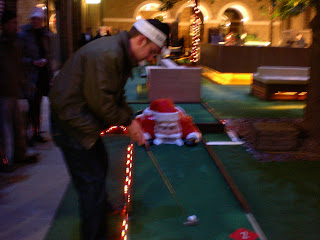 Back in May of this year I hit the '100 courses visited mark' at Pops Meadow Putting Green in Gorleston-on-Sea, and the next minigolf course we visit on the Crazy World of Minigolf Tour will be number 200!

Link to a blog post about other Mini Golf, Crazy Golf and Adventure Golf courses in and around London.
Posted by Richard Gottfried at Friday, December 11, 2009

Check out the latest blog post from the team at PutterFingers.co.uk 'Festive Crazy Golf Competition anyone?'

The blog post also has details of a 9-hole Christmas Minigolf Course that is in Manchester's Piccadilly Place in the run-up to Christmas - Chrizy Golf.