On Saturday 12th December 2009 me and Emily made the 200th Course Visit on the Crazy World of Minigolf Tour!

The location - the 9-hole Crazy Golf Course at the Kingsway Golf Centre in Melbourn, Cambridgeshire. 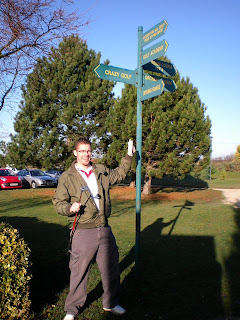 The course was the 200th I've visited since the Crazy World of Minigolf Tour began in September 2006, and was the 156th course played on the Tour as 44 of the 200 courses visited have been closed/derelict/flooded or unplayable!

Video - A round of Crazy Golf in Melbourn, Cambridgeshire. 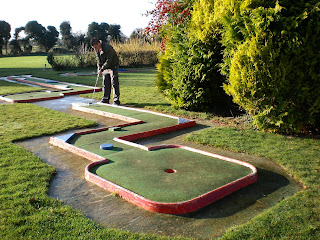 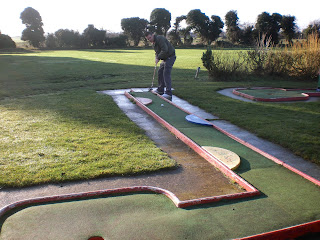 The Kingsway Golf Centre was a very good looking BIG Golf Centre with friendly staff. The Crazy Golf is £2.00 to play as much as you like.

Back in May of this year I made the 100th visit overall on the Crazy World of Minigolf Tour when I stumbled upon the 9-hole Arnold Palmer course at Pops Meadow Putting Green in Gorleston-on-Sea, and in June I played my 100th course at Smuggler's Cove Adventure Golf in South Shields.
Posted by Richard Gottfried at Friday, December 18, 2009

I heard today that this Crazy Golf course is no more!

Fellow BMGA Tour member Adam 'AK47' Kelly told me he had recently visited and the course has been replaced by a tricky 9-hole Putting Course named 'The Himalayas'.

This course is likely to be the location for the inaugural West Anglia Challenge Cup minigolf competition later in the year.