A visit to the Putters Adventure Golf course at the Superbowl in Warrington. 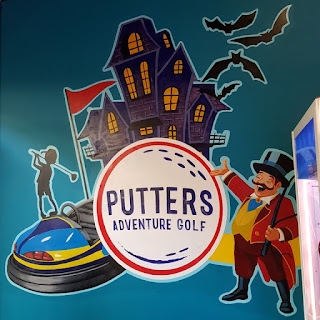 We had a very nice day out in Warrington, Cheshire on Saturday and visited Superbowl Warrington in the Golden Square shopping centre. 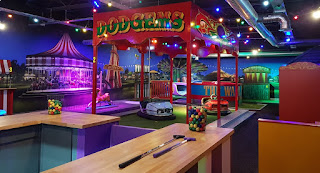 The 12-hole indoor Adventure Golf course has a funfair and circus theme and looks amazing. We've played miniature golf courses at funfairs, theme parks and at Circus Circus in Las Vegas but the Putters Adventure Golf layout in Warrington was the first we've played that has gone full on with the theme.


When we arrived we had to go to the tenpin bowling reception desk to ask to play. The member of staff who came over to the minigolf reception was really good and explained the layout. It was also a nice touch to be able to store our big coats and bags for free in the lockers next to the course.


The first hole eases you in by playing the Tea Cups. You then move on to the Dodgems, before riding the Carousel.

Next up are the Waltzers and The Wall of Death before you enter a Haunted House - including a graveyard!

After surviving the terror inside you putt through a nicely done Hall of Mirrors before shooting your ball through a cannon.


The final hole is located inside the Big Top.

In our match-up I scored 27 to take the win against Emily who shot a 31.

We've previously been to Walton Hall & Gardens in Warrington, but Saturday was the first time we've visited the town centre. We were impressed and look forward to returning. The Geeky Christmas Market at Warrington Indoor Market was really good, with a nice Return of the Jedi photo opportunity. We also had a superb time at Retro Arcade.

Videos from our visit to Putters Adventure Golf at Superbowl Warrington.


Putters Adventure Golf was the 938th course visited on our Crazy World of Minigolf Tour since September 2006. It was the 899th minigolf course we've been to in the British Isles.
Posted by Richard Gottfried at Monday, December 02, 2019