Adventure Golf at Walton Hall and Gardens in Warrington

Playing the Adventure Mini Golf course at Walton Hall and Gardens in Warrington.


Back in July 2008 we visited Walton Hall and Gardens in Warrington and visited the Crazy Golf course and Putting Green there.


Earlier this year a new Adventure Golf course opened up on the site of the old Crazy Golf course, a course that had been in the park since 1973 and was originally of the Eternit Miniature Golf format. 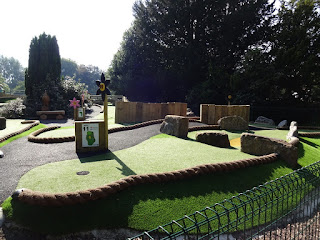 On the 18th September we met up with our friends and minigolf rivals Jon and Cheryl Angel for a round on the new course. We had great weather for the round on the tricky course.


My new 'local' knowledge must of played a part as I picked up the win with a score of 49. Emily and Jon tied for the runners-up spot on 52, with Cheryl picking up the bronze medal with a score of 65.

The new course became the 702nd visited and 413th played on our Crazy World of Minigolf Tour since September 2006. 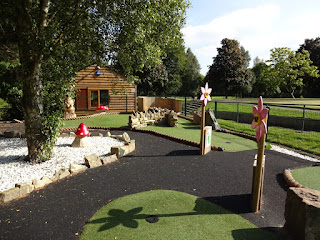 There's also a nice looking Pitch & Putt layout at Walton Hall and Gardens. We might give that a play in the future.


Check out the Walton Hall Gardens website for more information, opening times and prices for the Minigolf courses in the park.


As a fan (and curator of a) quirky museums we were interested to see a Cycle Museum at Walton Hall and Gardens too.

You can now sign-up to receive our miniature golf newsletter.
Posted by Richard Gottfried at Tuesday, September 27, 2016