On my trip to Scotland last weekend we made a visit to Loch Lomond in Balloch, Dunbartonshire. While we were having a wander around my Minigolf-alert alarm went off again as I spotted a sign for a Crazy Golf course! 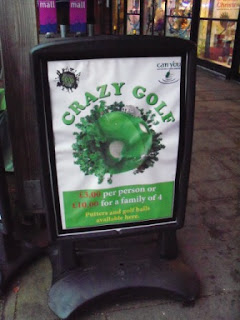 I was very pleased with my find, as I hadn't known a course was there before we visited. 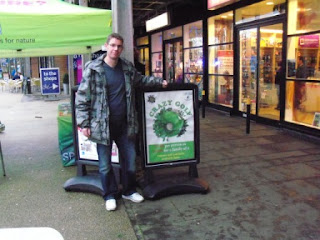 Unfortunately when I enquired about playing the course at the newsagents that hires out the Putters and Balls I was told that the course had been taken up for the time being to make way for a Twister fairground ride!? 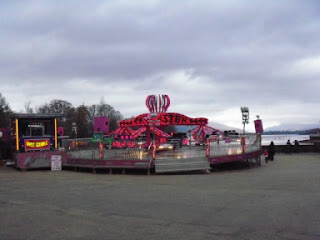 So, in a way it was good to have found another new Minigolf course, but it was unfortunate (but not entirely surprising considering my track record) of finding it to be unplayable on the day I visit!

Looking at the leaflet for the Loch Lomond Shopping Centre and the one for the nearby 'Muddy Good Fun' activity centre I saw that there is another Minigolf course there. I spotted this once I got home to Luton. Muddy Good Fun also has a Segway Safari (new for 2011). On a revisit to a Crazy Golf course in Great Yarmouth I once found the Safari Golf had been turned into a Segway Grand Prix!

While at the Loch Lomond shopping centre I had a look around the Antiques Centre and noticed on two old postcards that there was a Municipal Putting Course on the seafront at nearby Helensburgh in what looked to be the 1930's. After a web search I found that there is another Putting Green at Hermitage Park in Helensburgh.