Attempting to survive a Zombie outbreak in East Sussex! 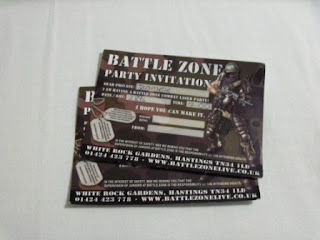 The Zombie Apocalypse scenario saw our two teams being led through the Zombie-infested Battle Zone arena by a group of Special Ops soldiers. 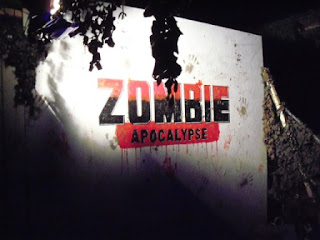 Most of us were down in Hastings getting ready for the Castle Golf World Crazy Golf Championships, but Christopher was super-excited about the event and had travelled to Hastings with his mate Anthony from Southsea. 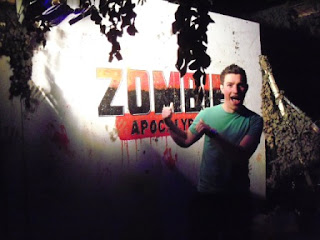 I wore my Zombie Slayers Association (ZSA) t-shirt to the event. 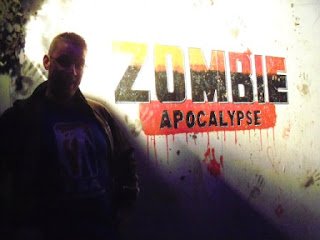 In our group me and Jam were the last players to 'die' and so were the top two survivors, although Jam had spent much of our pitiful five-minute fightback against the zombie hordes hiding in a hedge.

Our group of survivors after the Zombie Apocalypse. 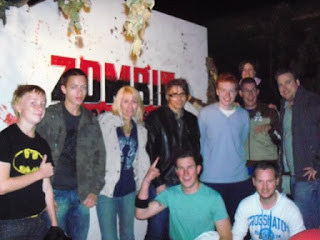 Christopher and two of his zombie 'friends'. So inspired was Christopher by the night out that he put together a great Zombie outfit himself for Halloween. George Romero would be proud. 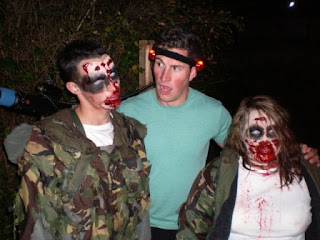 Me, looking far too happy stood next to a Zombie! It also appears that I am holding my gun the wrong way round!? 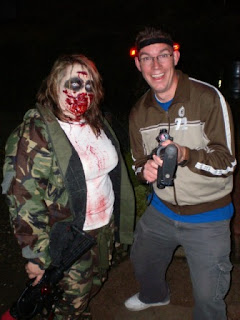 We were told that our group were the worst to ever play and so in the event of a Zombie Apocalypse we can all now rest easy in the knowledge that we would make better Zombies than survivors.

Two of the best moments for me were when everyone fired at Ted as they thought he was a Zombie, the other was the fact that despite being told that only headshots against the Zombies would count (and having watched countless Zombie films) we all still just fired wildly at the ensuing Zombies!?

The Battle Zone Zombie Apocalypse was a really great event, slightly spoiled by the fact that Christopher and his friend were almost denied entry as his surname had been written down incorrectly by a staff member when he made his booking. Thankfully common sense prevailed and he and Anthony were eventually allowed to join in.

Where Battle Zone is now used to be a great 18-hole Minigolf course that we played many times in BMGA Tour competitions. It was the 43rd course played on our Crazy World of Minigolf Tour.

When the area was still a minigolf course it was also the setting for "The Minigolf Welly Boot Swamp Ball Incident in Hastings"!

Sad! Yes, a shame that the Minigolf is now gone.

But the Zombie Apocalypse was fun! If a little to scary!