Luton Minigolfer Richard Gottfried picked up his second top ten finish of the 2011 BMGA Tour season as he finished in 9th spot of 38 players in the BMGA British Masters tournament at Strokes Adventure Golf course in Margate, Kent on Sunday 10th April.

Emily Gottfried was also in action at the competition, the first outdoor event of the British Minigolf Association season, and finished in 25th spot.

In excellent weather conditions at the 18-hole Strokes Adventure Golf course in Margate Richard managed rounds of 38(+2), 39(+3) and 39(+3) for a 54-hole total of 116(+8). The 9th place finish was Richard’s highest in the BMGA British Masters event. Richard made his debut in the BMGA British Masters tournament in Southend-on-Sea in 2007 and finished in 24th spot of 28 players. His two other previous results in the event have seen him finish in 22nd and 23rd places in 30 player fields. 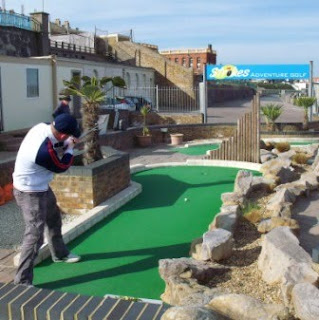 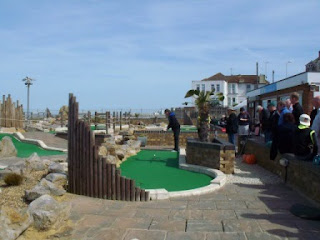 The tournament was won Canterbury’s Marc Chapman with a score of 98 (-10). Defending Champion Andy Exall of Paddock Wood, Kent was runner-up, with Cambridge’s Adam Kelly third.

Richard said “I was pleased with the rounds I put together and I was quite consistent. I had a few holes-in-one too and to get a top ten finish is always nice. I was also very pleased to finish so well in a very strong field in a prestigious event like the BMGA British Masters.”

In the latest update of the BMGA Order of Merit Rankings for 2010-2011 Richard is currently in 14th spot of 86 players, with Emily in 43rd place.