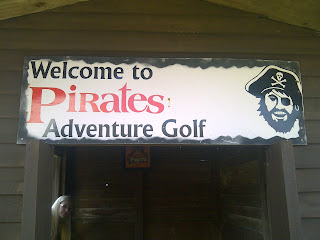 Following the tournament Christopher was renamed Christopher 'Don't Boot The Ball On The Final Hole in Frustration' Gottfried!
Hole-by-Hole Scores are unavailable at present, as according to Christopher "Tania has got the scorecard as she wanted to boast about beating me some more."

We first visited the Hayling Island Pirate Adventure Golf Course in July 2008, when it became the 69th course played on the Crazy World of Minigolf Tour.
On that occasion Christopher walked away the winner in the 'Hayling Island Classic' minigolf competition (played as a stage of the 'Hampshire & Isle of Wight Invitational Tournament'). The results were:
1st - Christopher Gottfried - 29(+7)
2nd - Richard Gottfried - 32(+10)
3rd - Emily Gottfried - 33(+11)

Links to other course visits on the Crazy World of Minigolf Tour.

Christopher 'Dont Boot the Ball On the Final Hole in Frustration' Gottfried said...

Going from Hayling Island's IMG 'best score' round of 29 to worst of 41... carded a 7 on the final hole after T cooly converted a 3!

Stats from the South-Coast: