After nine days in Wales we headed back into England to play the first English Minigolf course on our Crazy World of Minigolf Tour road trip since the Swedish Felt B-run courses in Oxford on the 13th August.

The 32nd minigolf course visit we made on the Tour was to Cae Glas Park in Oswestry, where we found an 18-hole Eternit Miniaturegolf course. 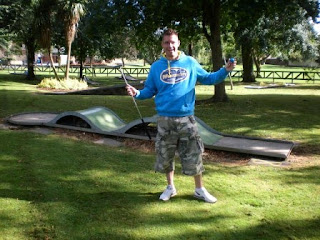 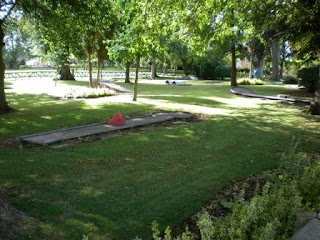 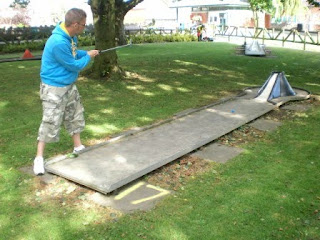 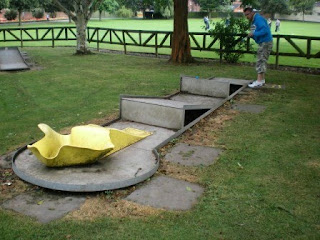 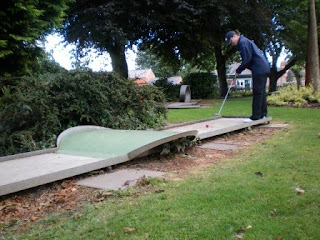 The 18th-hole didn't actually have a hole in the lane, instead you had to putt through a plant pot!? 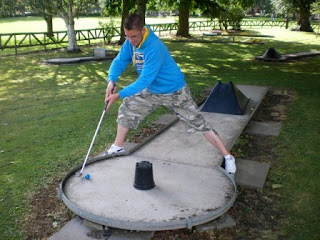 Emily celebrates after hitting an Ace on the 17th-hole to win the overall Holes-in-One on the Tour prize. 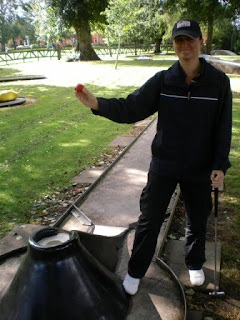 My fellow Minigolf Golf tourists Paul and Owen Johnson alerted me to a change in the Cae Glas Park minigolf course in Oswestry following another visit they made last week.

The 18th hole is no longer a 'plant pot' but is now a very crazy wooden box tied down with string!? Photos by Paul Johnson below:

This has got to be the wierdest hole (in both its past and present forms) in Minigolf!

In July 2012 we re-visited Oswestry, Shropshire to take part in the 2012 Oswestry Games multi-sport event. The Cae Glas Park Minigolf course was one of the host venues for the Minigolf events.

We also figured out that hole-18 used to be 'The Net' obstacle.

The hole at Cae Glas Park currently looks like this. An example of 'The Net' on a course in Stockholm, Sweden can be seen here and here.