Following the completion of the first day's play in the 2011 Castle Golf World Crazy Golf Championships a group of Seaside Amusements fans made the now traditional and ceremonial walk to The Old Town Amusement Arcade to compete in the second-annual '£2 Tat Challenge'. Photo: Vice-Chairman of the PTA Scott Lancley runs through the rules of the £2 Tat Challenge

This Amusements Challenge Tournament saw a total of 26 participants compete for the title on Saturday 29th October 2011. The field was double that of the 2010 event when ‘Johnson’ Paul Johnson took the win with a haul of nine pieces of tat. This year the title was not to be Paul Johnson’s again, as the man now known as Paul ‘Johnson Paul Johnson’ Johnson only managed to win one bit of tat with his stake money. 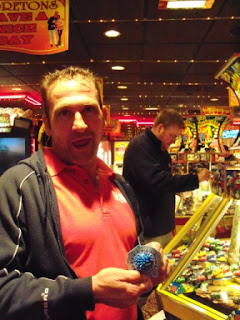 The 2011 Honours went to newcomer and junior Polly who managed to bag a grand total of eleven pieces of tat with her £2! 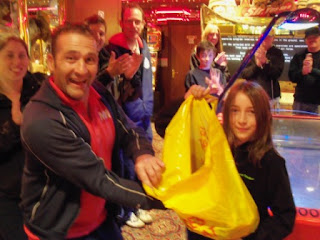 Photo: New Worlds £2 Tat Challenge Champion Polly receives her prize of all the tat. Last year's Champion Paul 'Johnson Paul Johnson' Johnson manages to get in on the photo

In total 127 pieces of tat were won this year with the players spending £52 in total to compete. In the 2010 event the thirteen players won 36 pieces of tat between them. 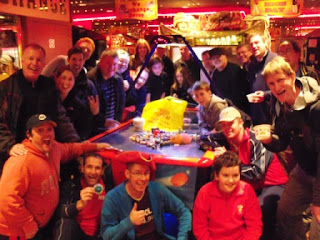 Photo: The motley crew of Tatters, Ratters and Sharks assemble for the obligatory Group Photo at the 2011 Worlds £2 Tat Challenge Competition

The Full Rankings for the 2011 £2 Tat Challenge can be seen below: 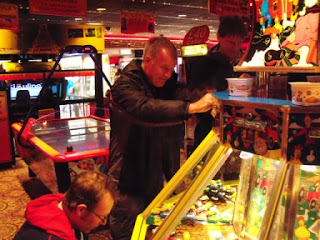 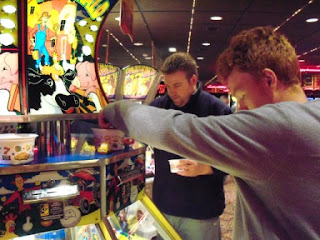 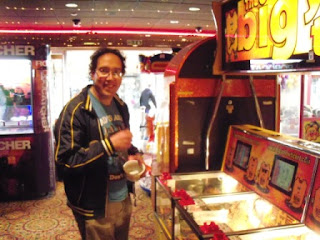 Photo: Peter 'Toy Jeep' Jones having a rare old time at the amusements 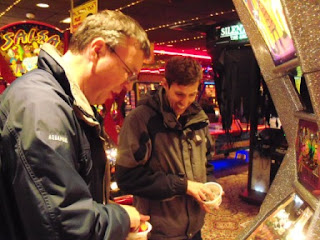 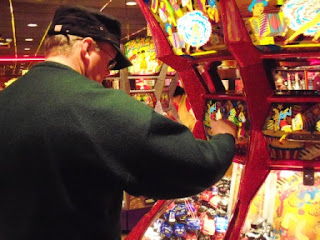 Photo: Denis 'I'll bring the bell' Exall pumps the 2p pusher full of money. His tactic and motto was simple - "It's quality of the prizes, not quantity that counts." Not in this game it's not Den ;-) 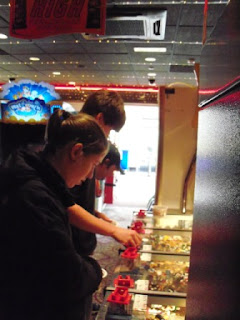 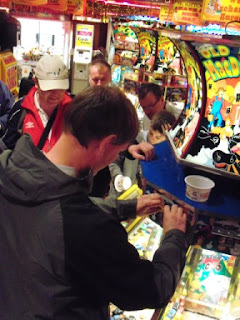 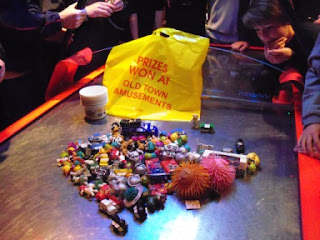 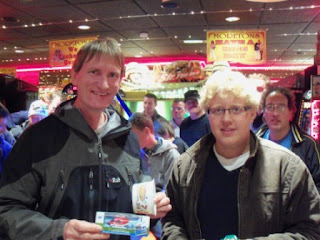 Photo: From l-r Chris Harding and James Rutherford collect a prize each for finishing in tied third place. Peter Jones finished in tied 18th place and just happens to be in the photo 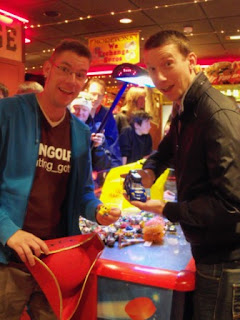 Photo: From l-r Richard 'The Town Crier' Gottfried and Stu 'Stewy' Bowker take their prize each for finishing as tied runners-up. Stu chose the quality prize that Denis Exall had won 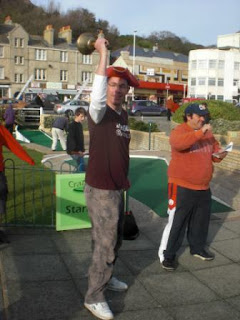 Photo: Squire the Town Crier invites one and all to join in the fun at the 2011 Worlds £2 Tat Challenge

The '£2 Tat Challenge' was an open invitation competition and featured in the Unofficial Booklet of the 2011 World Crazy Golf Championships.

Anticipation for the 2012 event is growing already!

Following the inaugural £2 Tat Challenge in Hastings last October there were also two tat Challenges in May 2011 which saw Richard Gottfried and Alan Norman crowned as interim champions. Controversially Alan subsequently exchanged 37 pieces of Tat from the overall winner’s swag-bag that he won for one Pingu Teddy Bear that he promptly called 'Penny'!?

Even tatting standards are increasing!
Better average than last year.

And what was the controversy at the event? Was there suspected cheating? Combination of tat?

I believe that any allegations of cheating have been referred to The Buttons Committee for further analysis.

Well I hope nobody gets jailed like in the cricket!

Fingers crossed. Although Scott has always reminded me of a young Sir Allen Stanford!

I still think that mine was the quality item and should have been worth more than the measly one that you gave me........

Yours was indeed a quality item, but it's the quantity of tat that counts, not the quality!

Maybe we'll have to introduce a new Quality Tat Category for 2012?

We'll put the suggestion forward to 'The Buttons Committee' in October ;-)