Checking out the former Blockbuster Video store in Nuneaton, Warwickshire.

Earlier this year the old sign at the former Blockbuster Video store on Regent Street in Nuneaton was uncovered when the most recent tenant of the building moved out. 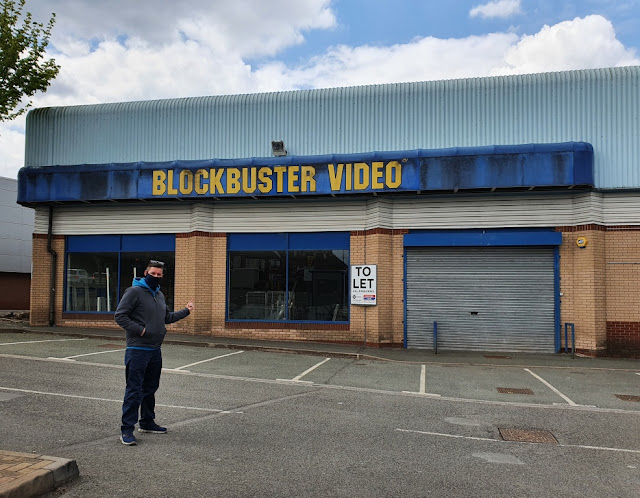 The unit had been home to a 365 Bargains store which has now moved-next-door-but-one on the same retail park.
It's always marvellous to find remnants of lost brands that evoke memories of a bygone time.
We were also lucky enough to spot an old Woolworths ghost sign while we were having a walk round Nuneaton town centre!

Blockbuster ceased operations in the UK in December 2013. At the start of the year there were 528 Blockbuster locations in the UK. The number dwindled until October when only 264 shops remained. The remaining stores closed on the 16th December that year.
At its peak in 2004 there were more than 9,000 Blockbuster stores around the world. There is now just one remaining store open. It's in Bend, Oregon, USA.
Luckily for us there are still relics of its time as a retail powerhouse on the high streets and retail parks of the UK.

We recently visited one of the last remaining Blockbuster Video Express shopfronts. It's in Billingham, County Durham.

With our retail archaeology interest piqued by our discovery of the abandoned Blockbuster Video store in Fallowfield in 2019 we've now visited a number of former Blockbuster locations, including:
Posted by Richard Gottfried at Tuesday, May 04, 2021

Videos from our visit to the old Blockbuster Video store in Nuneaton: