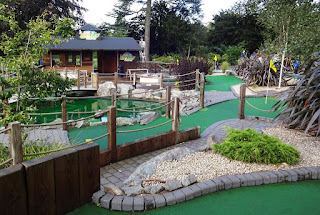 
In our minigolf match-up on the Black course I won with a score of 46 to Emily's 56. On the Red course we tied with scores of 43.

As well as the courses in Birmingham, Golden Putter has layouts in Wroxham, Rotherham and Warwick. Visit the Golden Putter website for more information, opening times and prices.


Cannon Hill Park was really nice and we had a pleasant time having a wander. The mac theatre and arts centre in the park is well worth a visit too.